The website for the book The Republican Reversal: Conservatives and the Environment from Nixon to Trump by James Morton Turner and Andrew C. Isenberg (Harvard UP, 2018) includes a range of interesting primary sources on the topic. Among them is a pdf of a 1971 memo by Lewis Powell to the US Chamber of Commerce, described on the website:


Soon-to-be Supreme Court justice Lewis Powell wrote this memo for the U.S. Chamber of Commerce in 1971 as conservatives grew concerned about the growing influence of liberals and an expanding regulatory state.  It offered conservatives a roadmap for exerting their political power in the defense of individualism and free enterprise. 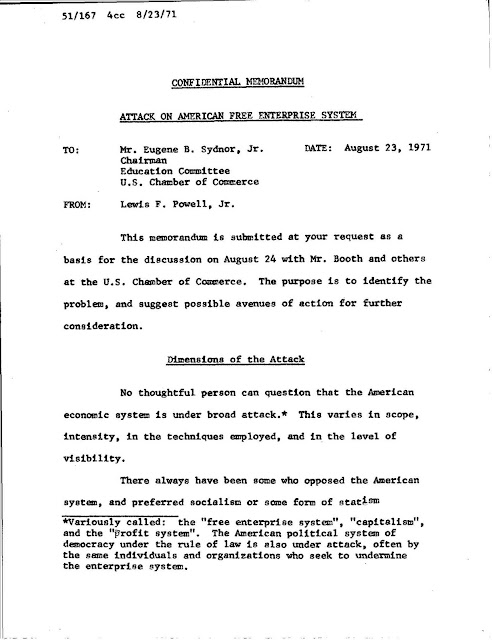 It's a pretty amazing document. Here's an excerpt:


As every business executive knows, few elements of American society today have as little influence in government as the American businessman, the corporation, or even the millions of corporate stockholders. If one doubts this, let him undertake the role of "lobbyist" for the business point of view before Congressional Committees. The same situation obtains in the legislative halls of most states and major cities. One does not exaggerate to say that, in terms of political influence with respect to the course of legislation and government action, the American business executive is truly the "forgotten man".

Current examples of the impotency of business, and of the near contempt with which businessmen's views are held, are the stampedes by politicians to support almost any legislation related to "consumerism" or to the "environment".

For more on the memo, see here.
Posted by David Schorr at 8:33 PM