"The Legal Origins of Corporate Social Responsibility", by Leonardo Becchetti, Rocco Ciciretti, and Pierluigi Conzo, relates the voluminous literature on the "Legal Origins Theory", which mostly focuses on the connections between finance law and economic development, and "corporate social responsibility" (CSR), a prominent buzzword in current environmental law and policy. The abstract:


The legal origin literature documents that civil and common law traditions have different impact on rules and economic outcomes. We contribute to this literature by investigating the relationship between corporate social responsibility and legal origins. Consistently with the main differences in historical and legal backgrounds and net of industry specific effects, the common law origin has a significant and positive impact on the Corporate Governance and Community Involvement domains, while the French legal tradition of civil law on the Human Resources domain. We also document that the lack of observable differences in the environmental domain can be explained by firms' progressive convergence to industry sustainability standards.

Orcs in the history of environmental law. Really. 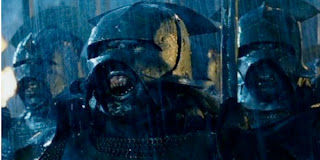 
In the second volume of J.R.R. Tolkien's The Lord of the Rings, Theoden, King of Rohan, learns that the armies of Saruman, the evil wizard, are advancing upon the defenseless city. He therefore orders the citizens to relocate to Helm's Deep, a massive fortress carved into the side of a mountain that has heretofore remained impenetrable. With the help of some elven allies who arrive in the nick of time from Rivendell, the Rohan soldiers repel wave after wave of attacks by the vicious Uruk-hai. As one wall is breached, the soldiers fall back behind an interior wall until at last there is nowhere to retreat. At that point, the king seizes the offensive, orders his soldiers to mount their steeds and take the battle to the enemy. Fortunately, at that moment Gandalf, a good wizard, returns to Helms Deep with a band of Rohan mounted soldiers, and the two armies put the enemy to rout.

For much of the past 30 years, the Environmental Protection Agency (“EPA”) and the laws that it administers have been under siege, much like the people of Rohan, from powerful economic, ideological and political actors who believe that the companies subject to EPA's regulatory authority should have greater freedom to go about their business unimpeded by “senseless” and “burdensome” regulations. The assaults came in three waves that peaked during the first years of the Reagan Administration, the first year of the 104th Congress, and the first six years of the George W. Bush Administration. During the first two years of the Obama Administration, EPA seized the offensive. Unlike the heroes of Helm's Deep, however, the forces of environmental progress were driven back behind the ramparts after only two years by a wholly unanticipated fourth assault from a reinvigorated business community that took advantage of an economic crisis brought on by the lack of federal regulation of the banking industry to inspire a populist uprising that inexplicably blamed federal regulation for the nation's current economic woes. Whether EPA and the foundational environmental laws that it implements will survive this fourth assault is by no means clear.

Posted by David Schorr at 11:29 PM No comments:


Doctrinal disconnects complicate adjudication of international water rights controversies. However, legal history and comparative law sources can fill gaps and build analogies to bridge differences in substantive law. Between Mexico and the United States in particular, the civil-common law divide at times appears vast, but has been occasionally narrowed by reference to shared Roman principles of usufruct or by incorporation of Mexican law into the U.S. system. This article argues that these commonalities can help solve the dispute over the All-American Canal in Southern California, which prior to being lined with concrete by the U.S. Bureau of Reclamation recharged groundwater supplying Mexican farmers and the endangered Colorado Delta ecosystem. Such meeting places for doctrine suggest that, even in domestic courts, nations need not attempt to resolve international problems through domestic law alone.

Customary rights and the environment in India

The latest issue of History Workshop Journal has Vinita Damodaran's latest entry into the debates over colonialism and the environment, "Indigenous Agency: Customary Rights and Tribal Protection in Eastern India, 1830–1930". Though the abstract (after the jump) makes it sound like the article deals extensively with post-independence India, in reality it focuses on the colonial period (as indicated by the title), crediting the British with making some genuine efforts to recognize customary property rights of indigenous peoples. Damodaran explains the stakes:


The current revisionist position in history and anthropology has focused on dismantling terms such as ‘tribe’, ‘forest’ and ‘indigenous’, used extensively in the past, and this has had a significant negative impact. As notions of ‘indigeneity’ and ‘customary rights’ come under revisionist attack the marginalization and proletarianization of forest-based communities and their traditional livelihoods gain pace all over the world. Recently however there has been a reassessment of the significance of customary law among tribal communities, in terms of access to resources and also of how people use it to claim citizenship. Parallels can be drawn between areas as far afield as England, Australia and Indonesia. As E. P. Thompson noted, in eighteenth-century Britain ‘custom’ was invoked to legitimate almost any usage, practice or demanded right. In a new collection, edited by Nandini Sundar and including work by sociologists, anthropologists and lawyers, the idea of custom as enshrined in colonial law makes a comeback. It is noted that while Indian courts are currently far from the judicial revolution heralded in Australia by the landmark Mabo judgement of 1992, they nevertheless recognize custom provided it is established as such by clear and unambiguous evidence. Whilst rightly challenging the static understandings of custom, Sundar points out that ‘custom deserves serious reconsideration as a discursive product of engagement between local communities and forging visions of the future in the name of the past and the spaces the state allows for pockets of exceptionalism’. It has also been argued recently that customary law may help to overcome the so-called ‘tragedy of the commons’ – the theory that open access to common property may lead to over-exploitation by self-interested individuals. Customary law systems in contrast are mostly concerned with (limited) common rather than public property. Historically grounded understandings of the conflict over customary rights and understanding customary law in the colonial context thus become crucially important.

Carol Rose has posted "Evolution and Environment in the Property Scholarship of James Krier", a short piece exploring the connections between property theory and environmental law--a prominent theme in Rose's own influential work. The abstract:

This article is a brief appreciation of the enormous contributions that Jim Krier has made to property law scholarship. It focuses on his engagement with theories about the evolution of property rights, and argues that Krier learned from his work in environmental law to be skeptical about just-so theories of institutional evolution, including the evolution of property. Instead, Krier has been constantly attentive to the reasons why institutional responses to resource problems actually unfold as they do, following their twists and turns through both successes and mishaps.

Posted by David Schorr at 4:34 PM No comments: