Sorry for the long silence - I hope I'll have some more time now to catch up on the blog.

Last spring Lisa Heinzerling published a review in the Michigan Law Review of Richard Lazarus's The Rule of Five: Making Climate History at the Supreme Court (Harvard UP, 2020). Heinzerling writes: 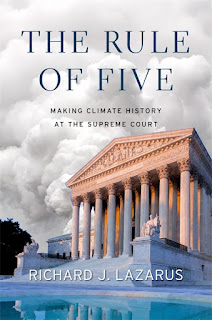 Let me start by saying that whoever chose the novelist Scott Turow as the lead blurbist for the book jacket nailed it. The book is crowded with ambitious lawyers, wise judges, tangled law, and stately courtrooms. There is a just cause and a triumphant outcome. There are heroes and antiheroes, with these judgments disguised but not hidden by Lazarus’s facially neutral thirdperson narrative. To top it all off, a courtroom scene serves as the dramatic climax. The book is, against all odds, a legal thriller.

All this novelistic drama, however, comes with costs. The costs are a deficit in critical judgment and a surfeit of gender traditionalism. The deficit in critical judgment manifests in Lazarus’s unalloyed reverence for the Supreme Court and apparent resistance to critiquing its work. This reverence is most vividly on display in the book’s descriptions of the Supreme Court building and its contents. The entire building becomes, in Lazarus’s narrative, a kind of reliquary: every object the justices touch, from pewter mugs to leather chairs to spittoons, takes on some larger and quasi-sacred meaning. The politics that otherwise stalk the city in which the Court sits do not, we are made to infer, darken the doors of this special building. And a frank acknowledgement of the gendered character of the men’s-club atmosphere of the Court is lost in Lazarus’s romanticizing.

The book’s deficit in critical judgment, now paired with unspoken gender traditionalism, also surfaces in its treatment of the human dramas of Massachusetts v EPA. Lazarus’s account is blind to the subtle gender dynamics of the case and, most troublingly, to his own reenactment of them. Lazarus selects as his cast of characters “five guys,” as he calls them, and “a gal,” as he calls me. His account of the five guys’ roles in the case uncritically accepts their version of events and then distorts it by fixating on and amplifying the conflicts that arose during this high-stakes litigation. In Lazarus’s rendering, the contributions and sacrifices of the female lawyers, including my own, recede to make room for the men.

Posted by David Schorr at 10:42 PM No comments: