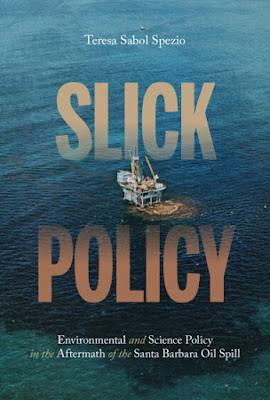 H-Environment recently published a review by Samm Newton of Teresa Sabol Spezio's Slick Policy: Environmental and Science Policy in the Aftermath of the Santa Barbara Oil Spill (U. Pittsburgh Press, 2018). The Santa Barbara spill is often pointed to as one of the foundational moments of modern American environmentalism and environmental regulation, but Spezio seems to flesh out the picture.

explores the relationships between oil pollution and political changes in the 1970s and asks how the Santa Barbara oil spill became a watershed moment in the history of environmental and science policy in the US, especially in regard to the Clean Water Act of 1972 (CWA). To answer this question, Sabol Spezio analyzes how the oil spill influenced the CWA and the National Environmental Policy Act (NEPA), as well as the formation of the Environmental Protection Agency (EPA) and the National Oceanic and Atmospheric Administration (NOAA). She then turns to the changing science and technology that became essential to understanding marine oil pollution and how that contributed to detecting water pollution in fresh water systems. She argues that the US government’s reactions to the Santa Barbara oil spill improved their ability to address controlling, measuring, and regulating water contamination on a federal level.

Her argument is broken into three sections. Part 1 describes environmental science and policy before 1969. Before the oil spill, no entity was officially in charge of managing the oceans. Federal waters were regulated by the Bureau of Land Management (BLM) and the United States Geological Service (USGS) under the guidance of the very oil companies exploiting the resources located in those waters. Additionally, scientists used different protocols and technologies to measure oil pollution. Before 1969, water quality was measured by smell, taste, sight, and/or the presence of disease. The oil spill in California challenged that precedent, contending that measurement by the senses was inefficient. A flurry of new research methods and technologies, specifically gas chromatography, followed in an effort to estimate both oil in water and the dispersants used to combat oil pollution.

As Sabol Spezio argues, it took a salient crisis, like the debacle that was the oil spill, to make regulatory change possible. Several events in the 1960s and ’70s, such as the publication of Rachel Carson’s Silent Spring (1962) and the Cuyahoga River fire, contributed to the salience of environmental degradation in the American attention cycle. Sabol Spezio adds to the literature by claiming that the Santa Barbara oil spill was not just one of many environmental crises but was the tipping point event that made the reform of US environmental regulation possible.

Last year the Journal of Economic Perspectives published "US Water Pollution Regulation over the Past Half Century: Burning Waters to Crystal Springs?" by David A. Keiser and Joseph S. Shapiro. The abstract:

In the half century since the founding of the US Environmental Protection Agency, public and private US sources have spent nearly $5 trillion ($2017) to provide clean rivers, lakes, and drinking water (annual spending of 0.8 percent of US GDP in most years). Yet over half of rivers and substantial shares of drinking water systems violate standards, and polls for decades have listed water pollution as Americans' number one environmental concern. We assess the history, effectiveness, and efficiency of the Clean Water Act and Safe Drinking Water Act and obtain four main conclusions. First, water pollution has fallen since these laws were passed, in part due to their interventions. Second, investments made under these laws could be more cost effective. Third, most recent studies estimate benefits of cleaning up pollution in rivers and lakes that are less than the costs, though these studies may undercount several potentially important types of benefits. Analysis finds more positive net benefits of drinking water quality investments. Fourth, economic research and teaching on water pollution are relatively uncommon, as measured by samples of publications, conference presentations, and textbooks. 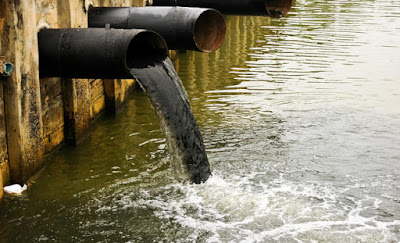 Posted by David Schorr at 12:45 PM No comments:

Sorry for the long silence! I just got April's Environmental History in the mail, and there's an interesting article by Keith Pluymers, "Cow Trials, Climate Change, and the Causes of Violence". The abstract:

In 1641, according to the vicar Thomas Johnson, Irish rebels in Mayo, in “meere hatred and derision of the English,” tried a group of English cattle for unspecified charges. They were convicted and executed. Many historians have pointed to this striking event as an example of the deep hatred underlying popular violence in the rebellion. The trials, however, were merely the most spectacular iteration of long-standing conflicts over transformations in animal husbandry between the Munster Plantation in the 1580s and the rebellion of the 1640s. The new pastoralism that emerged during these decades threatened traditional practices and landscapes while creating new vulnerabilities to poor weather and economic downturns. The combination of economic crises and harsh weather associated with the Little Ice Age exposed these vulnerabilities. The cow trials show that environmental forces shaped the 1641 Rebellion but demonstrate that historians assessing the impacts of climate and weather must attend to the social and economic contexts that produce vulnerability. 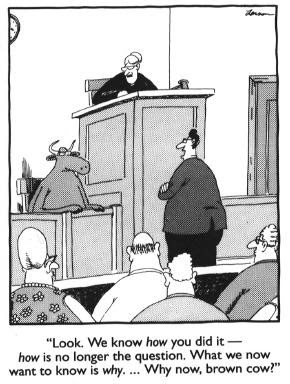 Posted by David Schorr at 11:19 PM No comments: