When loggers were green

The Forest History Society awarded its 2016 Blegen Award for the best article on forest and conservation history to Erik Loomis for his "When Loggers Were Green: Lumber, Labor, and Conservation, 1937-1948", published in Western Historical Quarterly.


There's a lot of law in the article, though the union was often on the losing side. The opening paragraphs:


In April 1939, Harold Pritchett, president of the International Woodworkers of America (IWA), went on radio station KIRO in Seattle to explain his union’s program for forest conservation. Pritchett bluntly attacked the timber industry for its wasteful practices, noting, “under the present policy of timber destruction three feet of Northwest timber is being used for every new foot being grown.” Saying the nation’s forests were too important to serve corporate masters, Pritchett demanded a government-led reforestation program that would hire unemployed loggers and recharge the timber resource. He argued for federal policies mandating selective logging rather than clear-cutting large patches of forest. Pritchett justified federal intervention by comparing it to the New Deal’s expansion of government authority into public utilities and banking as well as the passage of the Social Security Act. Only through “initiating a forest program that is based on the needs and also the responsibilities of the forest land owners” under “federal control of forest cutting practices,” Pritchett declared, could the forests of the Northwest remain productive for future generations.

Economics and property rights in the Gold Rush

I just came across a review that I wrote and submitted a while ago for the Business History Review on Mark Kanazawa's Golden Rules: The Origins of California Water Law in the Gold Rush (U. Chicago Press, 2015). I had thought the editors would inform me when it was published... Anyway, here's what I wrote: 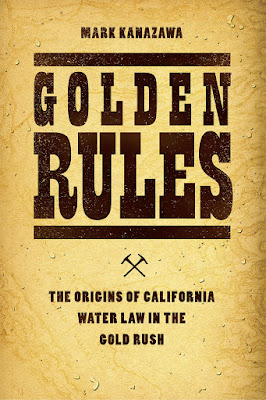 There's still gold in them thar hills. A century and a half after the torrent of gold-seekers to the California Sierras dried up, the flow of historical studies of the development of property rights on the gold frontier continues unabated. This work of detailed scholarship by Mark Kanazawa, an economic historian who has published extensively on water law in the western United States, is the latest entry into the auriferous regions.

Romance and adventure aside, economic and legal historians, along with property theorists, have been drawn to the California gold rush for two main reasons. First, the development of “codes” in the mining camps of the forty-niners provides a colorful case study of the institution of a system of law from scratch. Because government presence and state law were thin on the ground in gold-rush California, the ability of the miners to institute working systems of norms seems to serve as a historical example of successful private ordering. Beyond this, scholars of water law have taken a particular interest in the laws of the diggings, as the system of private rights in water that applies to this day in much of the western United States, known as the appropriation doctrine, is thought to have originated in the gold fields. So miners’ laws have received quite a lot of attention in studies hoping to explain how legal order spontaneously emerged out of chaos and why the miners abrogated the common-law regime of “riparian rights” in water (in which all landholders adjacent to the water source shared it) in favor of appropriation, based on the principle of “first in time, first in right.”

Golden Rules takes an economic approach to understanding the origin and evolution of water law in the California mining region in the decade or so following the discovery of gold at Sutter's Mill. After several substantial introductory chapters laying out the history of California gold mining and the ditch industry that developed to provide the water used in increasingly large and sophisticated mining operations—as well as the economic theories of property and tort he believes explain the historical development of the law—Kanazawa gets down to his analysis in detail. Chapter 5 examines the water rules adopted in the mining camps, arguing that they generally did a good job of promoting mining at an efficient scale. Chapter 6 discusses how economic forces gradually pushed disputes over water from the informal mining camp system to the official courts of the state. Chapter 7 argues that the appropriation doctrine as it developed in the California gold fields was economically efficient. Chapters 8 and 9 turn to legal issues often ignored in both gold rush histories and the legal history of water—the regulation of water quality and damage caused by bursting dams—arguing that with regard to these, too, California law provided efficient solutions.

A couple of years ago we noted the publication of Philip Hamburger's controversial Is Administrative Law Unlawful?. Paul Craig recently posted a paper refuting much of Hamburger's historical argument about the supposed lack of administrative law in early modern England, "The Legitimacy of US Administrative Law and the Foundations of English Administrative Law: Setting the Historical Record Straight". One section deals with the Commissioners of Sewers, and as it's relatively short, I'll reproduce it here (leaving out some of the footnotes):


Sidney and Beatrice Webb began their account of the Commissioners of Sewers [p 13] by noting the difficulty faced by the twentieth century observer in appreciating just how much of England had been composed of vast fens and marshes. Therein lies the explanation for the early attention given to drainage and defences against the sea, leading to the Statute of Sewers 1531, which gave statutory foundation for the Commissioners of Sewers and the Courts of Sewers. They resembled in many respects justices of the peace for the counties, albeit with a specialized jurisdiction over rivers, sewers, ditches, bridges, locks, weirs, sea defences and the like. Their jurisdiction was akin to that of a modern environmental agency. This analogy can be pressed further, insofar as the Commissioners of Sewers “combined in themselves, judicial, executive and even legislative powers” [Webbs, 21]. It is with the rulemaking powers that we are presently concerned.

The Statute of Sewers 1531 authorized Commissioners of Sewers to undertake flood defences broadly conceived, and gave them extensive powers to fulfil this remit. They could make individual decisions concerning repairs that were needed to river banks, sea walls, streams, ditches, gutters and the like, and apportion the costs. They were also authorized to make rules. The Commissioners could use the laws and customs of Romney Marsh as a boilerplate, or devise provisions according to their own discretion. They could thus, "[M]ake and ordain Statutes, Ordinances, and Provisions from time to time, as the Case shall require, for the Safeguard, Conservation, Redress, Correction, and Reformation of the Premisses, and of every of them, and the Parts lying to the same, necessary and behoful, after the Laws and Customs of Rumney Marsh in the County of Kent, or otherwise by any Ways or Means after your own Wisdoms and Discretions."

This rule-making capacity was extensive. The 1531 Statute stipulated that the Commissioners’ rules remained effective for the tenure of their office, which at that time was three years, but were ineffective thereafter. This temporal limit was, however, subject to an exception, whereby the rules could retain their binding force if they were “made and ingrossed in Parchment, and certified under the Seals of the said Commissioners into the King's Court of Chancery, and then the King's Royal Assent be had to the same.”

Read more »
Posted by David Schorr at 8:54 PM No comments:

National parks in the Netherlands


When thinking of national parks most people think of famous examples like Yellow Stone and Yosemite in the United States or the Serengeti in Tanzania. These parks are large in scale with an emphasis on wild life conservation and the preservation of scenic landscapes. Human activity and presence are restricted and regulated and people are visitors.

In smaller and densely populated countries like Britain or the Netherlands, the creation of large national parks is complicated. In these countries landscapes are far from natural and humans are part of the fabric of the landscape. For this reason, it is difficult to restrict human access and activities to create national parks.

In the Netherlands nature and human activity are almost inseparable because about half of the country is at or below sea level and is reclaimed or drained. Consequently, the landscape of the Netherlands is mostly the product of human intervention and can therefore be described as a cultural artefact. As a result, formal protection of landscapes and wildlife came late. One of the early attempts to create protected conservation areas came in 1928 with the Natuurschoonwet, freely translated as Nature Scenery Act. This Act was mostly about protecting country houses set in park like settings.

As Oosthoek himself notes in the video, even in the US park landscapes are far from natural. But, as anyone who has visited parks in the US and in Europe knows, there is a big difference in the degree to which parks aspire to a wild or "natural" aesthetic on the two continents, with European parks tending to distinguish far less sharply than their American counterparts between nature and culture.

Read more »
Posted by David Schorr at 4:32 PM No comments: