Well over a century ago, the Supreme Court ruled that it had that power to remedy interstate water pollution. That was in 1901. Six years later, the Court decided its first air pollution case.  Notably, these cases came during the conservative Lochner era when the Court was hardly known for its liberalism.  Quite the contrary. Yet the Court didn’t hesitate to address pollution issues.

The water pollution case was Missouri v. Illinois.  In a feat of engineering prowess or incredible hubris, depending on how you look at it, Illinois had built a canal to reverse the flow of a river from Lake Michigan to the Mississippi. The canal then became a dumping place for the city’s raw sewage. Missouri claimed that the sewage was befouling the water as far away as St. Louis. The Court had long heard other law suits between states, but this was apparently the first one to involve pollution.

I'm not sure this was really the US Supreme Court's first pollution case - how about the Slaughterhouse Cases? In any case, Farber goes on to also discuss Georgia v. Tennessee Copper Co., an interstate air pollution case. He comments:

These two cases are little known today, but they have cast long shadows.  Very briefly, here were some of their longterm impacts:

More on the US Supreme Court and the history of environmental law here.
Posted by David Schorr at 10:51 PM No comments:

A prize for my article

I'm happy to report that my article,  "Horizontal and vertical influences in colonial legal transplantation: water by-laws in British Palestine", recently was awarded the best article prize by the Israel Association for Law and History. (See related posts here.) I'd like to reproduce (in translation) one point made by the  prize committee in its statement, as I think it could be useful for others' research:

Beyond the excellence of the article itself, the committee believes that Schorr's article can serve as a model for future studies of legal transplantation. The article considers not only the process of transplantation as a product of the sovereign or lawyer's will, but also the material objects through which transplantation takes place - letters, memos, newspapers, and statute books - and it shows the importance of prosaic, everyday factors for this process, such as bureaucratic practices or even the location of law libraries.

In short, material factors matter - a point that environmental history knows full well, but is often shortchanged by legal histories.

Posted by David Schorr at 3:43 PM No comments:

More on the Clean Water Act at 50 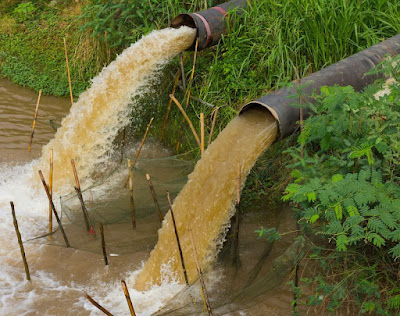 The CWA as enacted a half-century ago was enormously ambitious and, with the benefit of hindsight, quite naive: in the law’s legislative findings, Congress declared that “it is the national goal that the discharge of pollutants into the navigable waters be eliminated by 1985.”  That obviously did not, and will not, happen.

Nevertheless, and with the possible exception of the Clean Air Act, no law enacted as part of the outpouring of federal environmental legislation in the 1970’s has proven more successful and transformational than the CWA.  The nation’s rivers, streams, lakes and ocean waters are dramatically cleaner and healthier than they were a half-century ago.

That’s primarily due to two key features of the CWA: first, a nationwide permit system designed to mandate aggressive application of pollution control technology to limit pollution from “point sources” such as factories and power plants.  The second feature is a massive infusion of federal funding to state and local governments to upgrade sewage treatment plants across America.

Another key element of the CWA is its incorporation of “environmental federalism” principles.  Subject to federal review and approval (and incentivized by generous federal funding), willing states were allowed to assume responsibility for administering and enforcing the CWA’s federal permit systems.  California was the first state to seek and obtain this delegation of federal CWA authority in 1972, and most–but not all–states have since done so as well.

More on the history of the Clean Water Act here and here.

Posted by David Schorr at 9:48 PM No comments:

Recently published in the American Journal of Legal History is William B Meyer's "Class, Conservation, and the Police Power in the American Gilded Age: The Origins of Lawton v. Steele". The abstract:

The leading police power case of Lawton v. Steele, decided by the US Supreme Court in 1894, offers insight into the question of judicial class bias during the decades following the Civil War. Conflict arose in rural northern New York State over restrictions on livelihood fishing by nets imposed to protect sport angling by affluent tourists. Opposition to the restrictions was grounded in a producerist worldview and class consciousness. The matter reached the courts in a challenge to state laws permitting the summary destruction, without legal process, of nets placed illegally. Seemingly prohibited by the Fourteenth Amendment and previous case law, such destruction was upheld by a Supreme Court divided along ideological lines, correlating with the justices’ Whig or Jacksonian antecedents. The dissenters, those of Jacksonian sympathies, argued unsuccessfully against the challenged laws.

Posted by David Schorr at 8:44 PM No comments:

The US Clean Water Act at 50

Another 50th anniversary: Legal Planet reports that the California Environmental Law & Policy Center at U.C. Davis School of Law will convene a conference to commemorate the 50th anniversary of the federal Clean Water Act on Friday, October 7th. Highlights include "a stimulating conversation between two water quality experts who were instrumental in drafting the Clean Water Act in 1972 and California’s landmark Porter-Cologne Act, the state’s comprehensive water pollution control statute that both predated and influenced the CWA."

The free, in-person conference will be held at the U.C. Davis School of Law.  Advance registration is required. 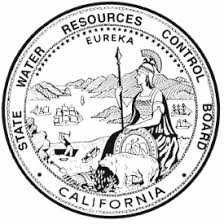 Posted by David Schorr at 4:51 PM No comments:

A little while back Environmental Politics carried a review by Katarina Eckerberg of The Untold Story of the World’s Leading Environmental Institution: UNEP at Fifty by Maria Ivanova (MIT Press, 2021). From the review: 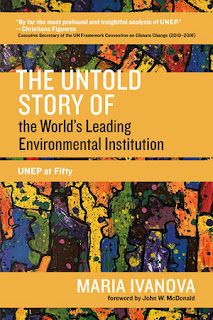 UNEP’s mission was to assess the state of the environment and to inform, inspire, empower, and catalyse the UN system in environmental affairs. But why has progress been so slow? There is urgent need to critically assess what UNEP has achieved – and not – in the past 50 years, to investigate why it has yet not become sufficiently powerful in the struggle for a more sustainable world, and what can be done to improve this.

Maria Ivanova’s book helps to understand exactly those issues. It delivers profound knowledge about the functioning of international relations, politics, and administration in practice, by revealing how UNEP’s successes, crises, and turning points have been shaped by both politics, geography, and individuals within and beyond UNEP itself. The book addresses a concern at the core of international environmental politics, focusing on the history and performance of the world’s leading global environmental authority over 50 years.

Its theoretical contribution lies foremost in the thick narratives of the development of our major international environmental conventions – including reversing the depletion of the ozone layer, regional seas pollution, chemicals and waste, climate change, as well as tackling land degradation, and the loss of biodiversity and forests. By applying the concepts of capacity, connectivity, and credibility as elements of performance she guides us through both the empirical analysis and the potential ways forward. Capacity here refers to the people and resources, connectivity to infrastructure and representation, and credibility to authority and legitimacy of the institution.

Success on the commons

Last year Environmental History published a review by Frederica Bowcutt of Mexico’s Community Forest Enterprises: Success on the Commons and the Seeds of a Good Anthropocene, by David Barton Bray (U. Arizona Press, 2020). Some excerpts: 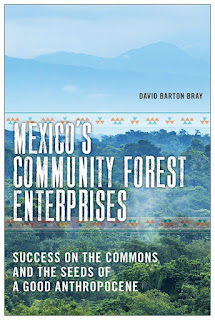 According to Bray, Garrett Hardin justified enclosure and centralized land management based on an ahistorical understanding; shared-pool commons have always been regulated by rules to prevent overuse. They are not, as Hardin suggested, a free for all. Ownership of land with valuable forest resources incentivizes rural Mexican communities to adopt, develop, and adhere to rules designed to prevent a tragedy of the commons. Results thus far indicate that community-based management of local forest resources “can be as effective as public protected areas in conserving forest cover and biodiversity, while also generating income for local communities” (p. 246).

Read more »
Posted by David Schorr at 7:37 PM No comments:

A model treaty for transboundary pollution

Posted by David Schorr at 4:08 PM No comments:

From colonial times until the mid-twentieth century, governments paid bounties to kill wolves, mountain lions, and other wild animals. Clearing the wild was a sustained legislative project. Yet interest in these statutes has remained confined to scholarship on wildlife conservation, and important insights for legal theory have gone unobserved.

Based on new research, I argue that these bounty statutes have implications for the history and theory of property. The statutes were, in their intent and effect, land use regulations. For more than three centuries, they encouraged livestock. By removing wild animals, the statutes made livestock-raising a more cost-effective use of land than it otherwise would have been for landowners. And by removing wolves and other ecologically important species, they changed the character of land in ways that diminished the value of wilder uses. The statutes chose winners among land uses, and they operated over a much longer timeframe than conventional accounts, which date land use regulation’s origin to 1916, would suggest.

The statutes also had a deeper consequence. They encouraged private property in land. Predation on livestock is the kind of “large event” that, on a famous theory developed by Robert Ellickson, makes collectively-owned land valuable. By acting to remove the threat of wild animal predation on livestock in settlement communities, governments weighted the scale toward privately-owned, fee-simple land regimes. This discovery raises questions for a popular normative justification for private property in land.

The Article finally offers thoughts as to why animal eradication was such a pronounced public policy. The phenomenon suggests the influence of cultural preferences on property regimes.

Note: Apparently bounties are still with us, as can be seen in the recent poster below.

Posted by David Schorr at 5:45 PM No comments:

Carbon dioxide as an air pollutant

More on the co-production of environmental science and law: Just out in Environment and History is an article by Ashton Macfarlane, "The Many Pollutant Identities of Carbon Dioxide: Global Climate Monitoring and Air Pollution Research in New Zealand, 1968–1975", that discusses the way carbon dioxide was framed as an air pollutant due to the modern air pollution statutes of the 1960s and '70s. The abstract:

In the late 1960s, New Zealand and the United States collaborated to establish a southern hemispheric carbon dioxide (CO2) monitoring station on New Zealand’s coastal cliffs. The New Zealand CO2 Project, as it came to be known, is an underappreciated landmark in the history of environmental monitoring. The archival record of its early years reveals the extent to which efforts to measure atmospheric carbon dioxide concentrations interacted closely with one of the most hotly debated political issues of the mid-twentieth century: urban air pollution. The designation of CO2 as air pollution on a planetary scale had profound legal implications in an era in which clean air legislation increasingly brought air pollution within the scope of governmental regulation, and administrative agencies began to jostle for control of the monitoring enterprise. The precise nature of CO2 as an air pollutant, however, was difficult to pin down. In these initial years of concerted carbon dioxide monitoring, when the lines between climate science and air pollution research were still blurred, CO2 developed its many pollutant identities. The nature of these identities – and the ways in which scientists and science administrators negotiated their boundaries – retain their relevance today, as nations continue to link air pollution and climate legislation in the twenty-first century.

Posted by David Schorr at 12:33 PM No comments:

In the last post in this series we saw how Enlightenment-era stadial thought was passed on to modern commons theory through the aboriginal... 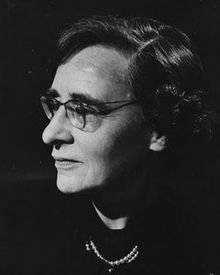