H-Environment recently posted a Roundtable Review of Carmel Finley's All the Fish in the Sea: Maximum Sustainable Yield and the Failure of Fisheries Management (U Chicago Press, 2011). Particularly interesting are the comments by Sayuri Guthrie-Shimizu. Some excerpts: 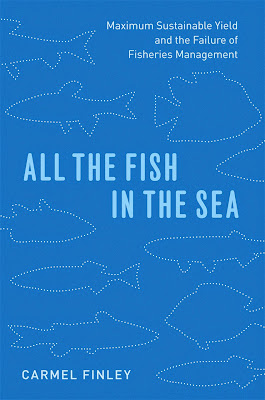 In her discussion of the surprising flimsiness of MSY as a scientific concept, Finlay points to the “scientific racism” beneath the attitudes of the American public officials and scientists concerned with fisheries regulation at mid-century. They long held the notion, or even truism as it were, that Japanese fish science was at best woefully lacking by Western standards of scientific rigor, and at worst nonexistent. In fact, Finley argues, Japan, because of its dependence on marine living resources, had a long and venerable history of studying fish stocks and their husbandry going back to the industrialization of the nation’s inshore and coastal fisheries in the nineteenth century. Japan was also a respected source of knowledge in the inchoate fish science sought by other nations from the 1930s on, including the United States…. Works by historians of Japanese fisheries such as Yoshitaka Takahashi attest that Finley is right: Japan had indeed developed a sophisticated administrative system of fisheries management based on systematic accumulation of data even before Japan was “forced open” by Commodore Matthew Perry and famously exposed to the benefits of Western science and technology. Another interesting point Finley makes about various iterations of American racism or ethnocentrism tainting the views of American scientists and practitioners is that the United States vilified the efforts by Central American coastal nations such as Ecuador and Peru to curb American bait fishing off their shores as an attempt to extract a “tribute” from US fishermen, and they refused to regard such control as a legitimate administrative prerogative exercised by sovereign states on a par with the United States.

I applaud Finley for showing us international historians that John Foster Dulles, as the chief US negotiator for a Japanese peace treaty, twisted Prime Minister Shigeru Yoshida’s arm over separating postwar fisheries, not just the Chinese representation question, from multilateral World War II peacemaking. Just as Dulles exacted from a reluctant Yoshida a letter pledging that Tokyo would establish diplomatic relations with Chiang Kai-shek’s Republic of China outside the framework of the San Francisco Peace Treaty, the stern American chief negotiator, in consultation with chief State Department fisheries official Chapman, forced the Japanese government to acquiesce to a negotiation over Japan’s fishing activities separate from the San Francisco peace settlement. The result was the North Pacific High Seas Fisheries Convention, signed by the United States, Canada, and Japan in May 1952. It was in this very first postwar treaty the Japanese government signed as a “sovereign state” redux that Tokyo swallowed the “abstention” doctrine governing high-seas fisheries. In this highly unequal treaty, Japan, supposedly on its own volition, agreed to “abstain” from the commercial harvesting of certain fish species (salmon and halibut) in the high seas off Alaska and Canada. Finley masterfully shows that, here too, MSY was the diplomatic tool, not a scientific concept, deployed by American fisheries stakeholders such as Chapman to prevent the Japanese distant-water fishing fleet from catching “their fish”—i.e., Americans’ and Canadians’—swimming in the high seas outside North American maritime jurisdictions….

Outside the bailiwick of US-Japanese relations, Finley similarly upends with her “fish story” the storyline international historians are accustomed to. For example, she informs us how the United States saw its control begin to slip over the issue of the three-mile coastal jurisdiction—the bedrock of the freedom-of-the-seas principle so dear to its national history—facing members of the Organization of American States (OAS). This happened at the very time when this first postwar regional alliance was a driver and manifestation of the intra-hemispheric solidarity that the United States was able to command in the early postwar years. When small coastal states such as Ecuador, Peru, and Chile joined Mexico in expanding their seaward jurisdictional claims in order to shield their offshore fish stocks from aggressive harvesting by capital-rich high-seas fishing nations spearheaded by the United States, the United States’ weakening hold on the international maritime order premised on the threemile coastal jurisdiction became ever more precarious. More interesting still, this “Western Hemisphere” revolt (reinforced by other small coastal-state insurgents like Iceland and Denmark, both original members of NATO) first made its weight felt in forums provided by the United Nations where the United States still enjoyed a commanding position. Washington unexpectedly found a strange bedfellow in Moscow when it came to the matter of expansive claims on high-seas fisheries rights during the 1950s, at the height of the Cold War no less. Friends and enemies often switched sides depending on whether the battle took place on land or at sea.