Last year Inner Asia published Khohchahar Chulu's "The Formation and Regulations of the Military Hunt in Qing Mongolia". (Thanks to Mitra Shirafi at Legal History Blog for noting it.) The abstract:


In the Mongolian tradition, hunting and war have had strong connections with each other. During the Qing Empire, Mongolian hunts were not only local practices, but were also involved in the Qing empire-building project. On the other hand, the collective hunt itself was by nature a dangerous activity that contained potential physical risks from wild animal attacks as well as human errors. It is conventionally understood that the hunt therefore must have been well organised in order to secure success and security. But how a hunt was organised and operated in reality has not yet been well examined. This study explores the organisational structure and regulations of a military hunt in Qing Inner Mongolia, a geographically important zone where both the Manchus and Mongols actively held hunts. The primary focus of this article is the nineteenth-century Alasha Banner grand hunt, a well-organised and documented Mongolian military hunt from the Qing period.

Posted by David Schorr at 2:23 PM No comments:

The making of Calcutta

More on Debjani Bhattacharyya: Rohan D'Souza recently reviewed her Empire and Ecology in the Bengal Delta: The Making of Calcutta (Cambridge UP, 2018) for H-Water. D'Souza writes: 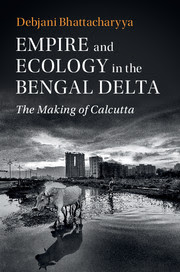 Empire and Ecology in the Bengal Delta announces a shift in gears within the bourgeoning and bustling field of the environmental histories of South Asia. Instead of taking the familiar route that revisits themes in the existing canon—forests, irrigation, and carnivore control—Debjani Bhattacharyya cuts an altogether fresh path by exploring how radical ecological change was critical to the making of urban colonial Calcutta (today’s Kolkata). The core claims in the book pivot on the many arduous British efforts from the late eighteenth century onward to transform Calcutta’s soggy marshy origins into landed concrete spaces—the firmed-up surfaces upon which were built residential, commercial, and industrial infrastructure and the basis for widespread financial speculation in real estate.

Whereas much of the detail on the drying out of British India’s premier colonial city can be found in a fairly voluminous documentation on drainage works, reclamation projects, and hydraulic engineering schemes, these admittedly technical accounts, we are cautioned, fail to meaningfully grasp the actual “secrets-of-land-making” (p. 1). transformation of “floating watery soils” into firm land, Bhattacharyya argues, was principally an ideological project that was profoundly underwritten by the notion of landed property, which, as a “legal technology” to “demarcate land, marsh, accretion and water,” actively triggered the clotting of Calcutta into urban soil (p. 23). Colonial landed property, moreover, by being set on a treadmill of economic valuation inevitably transmuted into the archetypal capitalist commodity: subject to the logics of the market and the relentless pursuit of profit. Unsurprisingly, therefore, as Calcutta in the early decades of the twentieth century began to explode into a crowded city—short on space, cramped with people, and lacking affordable housing—a thriving and ferocious urban land market burst forward. While Bhattacharyya does provide a riveting account of the aggressive jostling for land among an increasingly vocal working class, sundry lobbies of builders, extortionate landlords, the oscillating fates of rent speculators, and various interventions by municipal authorities, the discussion, however, is more pointedly aimed at returning us to the “secret.”

What finally emerged from the protracted confrontations over land scarcity, we are told, was a less advertised, if not entirely unstated, consensus among the various contending urban interests: that the outlying marshes and untidy swamps were “lands-in-waiting” rather than distinct hydrological phenomena (p. 172). This unanimous and determined call for cutting off the city from its “watery hinterlands,” in Bhattacharyya’s estimate, actually sought to mask a radical ecological rupture by which land and water were meant to be split into distinct and separable entities, instead of being acknowledged as ecologically entwined domains and integral to Bengal’s deltaic environments.

The American Historical Review recently published Miranda Johnson's "The Case of the Million-Dollar Duck: A Hunter, His Treaty, and the Bending of the Settler Contract". The abstract:


In settler states such as Canada, indigenous peoples’ claims for sovereignty in the late twentieth century became matters of intense public and political debate. Provoked by widespread indigenous rights activism of the 1970s, the Canadian state embarked on a large-scale examination of claims for rights and restitution. By focusing on the 1962 case of a duck hunter who insisted on his treaty right to hunt as he pleased in a Canadian borderlands region that was becoming more tightly woven into the fabric of the settler nation, this article argues for the value of recovering the discursive strategies of indigenous peoples in making sovereign claims prior to 1970s activism. I suggest that such claims were effective in bending the “settler contract,” which refers to the founding of settler states in dispossession and the silencing of indigenous actors. My approach brings to the fore a distinctive form of non-elite politics, what I call “treaty talk,” or the vernacular stories, civic rituals, and political disputes concerning the treaty promises that Canadian authorities made to northern indigenous communities earlier in the twentieth century. Although treaty talk did not break the settler contract, it posed a significant challenge to settler law and led one judge to reinvent a Canadian myth of benevolent empire.

Posted by David Schorr at 4:54 PM No comments: