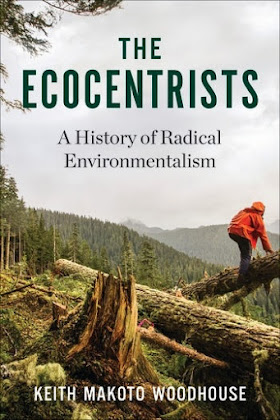 U.S. Intellectual History Blog just finished a very interesting roundtable, organized by Anthony Chaney, on Keith Makoto Woodhouse's The Ecocentrists: A History of Radical Environmentalism (Columbia UP, 2018), the 2019 winner of the Society for US Intellectual History’s award for best book of intellectual history. The roundtable includes insightful essays by Roy Scranton, Natasha Zaretsky, Paul Murphy, and Daniel Wayne Rinn, as well as a response by Woodhouse.

An excerpt from Zaretsky's piece demonstrates the relevance of the series to legal and environmental historians and practitioners alike:

[The] fantasy of a world emptied of people casts humans as an invasive species and the non-human world as bouncing back once we have exited the scene. In The Ecocentrists, Keith Makoto Woodhouse terms this thinking “holism”—a tendency to portray human civilization as comprised of an undifferentiated mass of people bearing down on a planet with finite resources and capacities. This proclivity toward holism was at the heart of radical environmentalism, where it played a paradoxical role. On the one hand, it gave the movement its teeth and empowered activists to reject the incrementalism of mainstream environmental organizations and engage in direct action, often at personal risk. On the other hand, at its worst, holism could shade into misanthropy, a blindness to social and economic inequality, and even anti-immigrant nativism.

Woodhouse is keenly aware of this paradox, and the portrait of radical environmentalists that emerges are nuanced. This book neither pathologizes nor romanticizes radical environmental activists. Much of the book centers on the story of Earth First!, and at one point, Woodhouse stresses that Earth First!ers saw themselves as part of a movement rather than an organization. It is worth taking a moment to reflect on the depth of that distinction. Earth First! was founded in April 1980 at the start of a decade when the radical energies of many social movements of the 1960s and 1970s would be routed into a dense and well-funded liberal apparatus comprised of non-profit organizations, think tanks, and lobbying groups that sought to reform the system from the inside. Modern environmentalism was particularly vulnerable to this kind of institutional capture because of its reliance on litigation strategies. But Earth First!ers were “movement” people. To be a movement person is to set oneself apart from the dominant society, to feel swept up by the forces of historical change, and to place political commitment at the center of your everyday life in ways that people outside the movement often find baffling and inexplicable. These tendencies arguably ran even deeper for radical environmentalists, who were motivated by a sense of urgency predicated on the prediction that the planet was running out of time. The Earth First! slogan—“no compromise for Mother Earth”—captured the movement’s single-minded drive.

But that single-mindedness also created contradictions that dog radical environmentalism to this day. The portrait of an existential standoff between an imperiled earth and “human civilization” overlooked the histories of global capitalism, colonialism and imperialism, enslavement and coercive labor structures, the appropriation of indigenous lands, concentrations of wealth and resources in the global north, and widening social and economic inequality. When radical environmentalists simplistically argued that “people were the problem,” they failed to grapple with how these histories were entwined with assaults on land, air, and water. This critique of a “universal humanity” will be familiar to anyone who has followed the more recent debate about the Anthropocene, the geoscientific term used to mark the moment when human activity became traceable in the geological record. Scholars such as Jason Moore, Andreas Malm, and Donna Haraway reject the term “Anthropocene” for its universalizing tendencies, introducing instead clumsier but more precise designations such as the Capitalocene, the Chthulucene, and the Plantationocene. Woodhouse’s book reminds us that the current Anthropocene debate has deep historical roots. It has long proven difficult for radical environmentalists to simultaneously combat both the planetary threats posed by humans and the inequalities that exist among humans. (Radical environmentalists are not the only ones who struggle with this. Activists focused on human inequality have also tended to subordinate the non-human world, but that is a different–if not unrelated–story).

Read more »
Posted by David Schorr at 1:48 PM No comments: 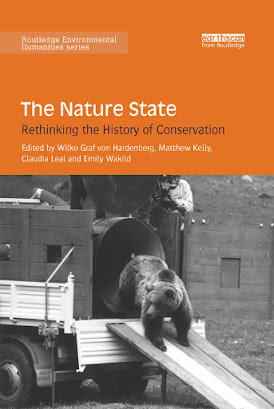 Building on the work of David Blackbourn, James Scott, Adam Rome, Paul Sutter, and Frank Zelko, the present volume asks us to take a fresh look at the mechanics of power and governmental activity in matters of conservationist enquiry, taking in ideas about global networks, modernity, localism and the politics of negotiation. Implicit here are two concepts: firstly, a challenge to the idea of American hegemony in leading the world in conservation thinking and, secondly, a sense that in embarking on various kinds of environmental governance, state organs were able to propagate their influence and reach. Here the book reveals a foundational tension, arguing for the ‘irregular but near-universal character of the nature state’ (p. 9), while also pointing to the way in which different geographies, constituencies and structures created a site-specific patchwork polity marked by formal and informal demonstrations of authority.

... the book is provocatively, but somewhat deceptively titled. In fact, in the story of environmental resources and political capital set out here across diverse geographies, we find not one state but many, sometimes redoubtable, sometimes hamstrung, and always complicated.

Posted by David Schorr at 10:37 AM No comments: