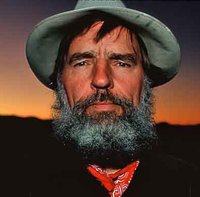 Abbey’s love-letters to Utah’s red-rock country spawned generations of canyoneering backpackers, and still serve as the heart of aesthetic and political defenses of desert wilderness. Ever since, Abbey has been attacked and defended. Was he racist, misogynist, and anti-immigration? He was. His views of Black and Brown people were deplorable, and his descriptions of women were retrograde. And yet, his defenders inevitably retort, we need his irascible, cranky, and irrepressible voice today more than ever.

But do we? I have come to (re)bury Edward Abbey, not to praise him. (Abbey died in 1989 at the age of 62; he was buried illegally on public lands.) Or more accurately, to make a pitch for putting Abbey in his place and moving on. That place should be in the context of what it means to protect those same dramatic and soul-stirring landscapes without perpetuating an alienating version of what it means to be “truly wild,” or “truly radical,” or “truly environmentalist.” The problem with re-lionizing Abbey in 2018 is not just that he was sexist, racist, and xenophobic. But also that those views were sewn into his brand of so-called radicalism. They constituted the lenses through which he saw the landscape he aimed to protect.

What Abbey saw were beautiful empty places where white men (quite specifically) could be free and wild. Their version of wilderness preservation, even supplemented by the occasional nod to the evils of growth-dependent and extraction-based economies, was oblivious to the structures that enabled their seemingly unmediated encounters with the desert. Those structures included brutal and unscrupulous campaigns to dispossess Native people of most of southeast Utah. They included the failure of post-Civil War efforts to democratize homesteading by including eligible African Americans eager to flee the South. And they included, time and again, the cultural acceptability of exploiting women, both by treating them as fungible sex toys and by relying on them to mind the homestead and raise the young’uns. Abbey’s version of radical environmentalism assumes away all of the inequalities baked into his ability to be a free man in canyon country. Abbey also managed to alienate lots of white men while he was at it. He scorned ordinary work as part of his critique of corporate and industrial interests and romanticized manual labor even while he railed against ranchers and farmers in his midst.

...Like Henry David Thoreau, Abbey taps into an elemental longing for “wildness.”... This aesthetic has a long pedigree.... Abbey brought this aesthetic to the desert southwest. For doing so, he earned devoted followers in his own time and generations of acolytes afterward. Had he just done that, we could celebrate his literary contributions and stop there.

But Abbey did more. He embraced a xenophobic and overtly racist version of anti-growth environmentalism. In 1963, during the heart of the civil rights movement, Abbey wrote:

According to the morning newspaper, the population of America will reach 267 million by 2000 AD. An increase of forty million, or about one-sixth, in only seventeen years! And the racial composition of the population will also change considerably: the white birth rate is about sixty per thousand females, the Negro rate eighty-three per thousand, and the Hispanic rate ninety-six per thousand. Am I a racist? I guess I am. I certainly do not wish to live in a society dominated by blacks, or Mexicans, or Orientals. Look at Africa, at Mexico, at Asia. Garrett Hardin compares our situation to an overcrowded lifeboat in a sea of drowning bodies. If we take more aboard, the boat will be swamped and we’ll all go under. Militarize our borders. The lifeboat is listing.

There is a long pedigree to this kind of thinking too. The first wave of American conservationists included prominent white supremacists, such as Madison Grant and Henry Fairfield Osborn. They associated nature preservation with racial superiority and employed the disgraced science of eugenics to justify their approach. Sadly, these views are not limited to marginal figures in the conservation canon. John Muir, founder of the Sierra Club and literary antecedent to Abbey, espoused ugly anti-Indian views and was also largely apolitical with regard to the important civil rights and egalitarian movements of his day. Even Aldo Leopold, who penned the justly celebrated “Land Ethic,” held some members of the human community in higher esteem than others. In Vanishing America: Species Extinction, Racial Peril, and the Origins of Conservation, Miles Powell unearths Leopold’s unsavory statements about immigration and population growth. In an exchange with natural historian William Vogt, Leopold railed against Asians and other non-Western European immigrants who threatened to overrun the country with their high rates of reproduction. There is a through-line from these Malthusian thoughts to Paul Ehrlich’s Population Bomb, which became the basis for late-twentieth century versions of the immigration panic within some environmental circles. The Sierra Club successfully fended off an anti-immigrant board take-over in 2004, but the fight was a reminder that white nativist ideologies still lurk within some strains of environmentalism.

Yet many other environmentalisms also exist. The environmental justice movement, which gained prominence through battles over racially discriminatory siting and permitting, today includes broad redistributive concerns. Social ecologists have long argued that there will be no environmental protection as long as capitalism, with all of its attendant exploitative hierarchies, forms the basis for our economic system. In many indigenous worldviews, leading an ethical and moral life is defined in the context of taking care of the Earth and all its creatures, including human ones. And most mainstream versions of environmentalism today include at least rhetorical nods to justice, equality, and sustainability. The science of climate change and other global environmental threats make it naïve, at best, not to consider the connections between consumption, inequality, and environmental protection.

Given the long, hard road ahead to make good on efforts to dismantle local and global inequality, combat climate change, and sustain/create just and equitable communities, it is past time to celebrate Ed Abbey, the person. Not only was he sexist and racist; he was politically shallow. He espoused a naïve anarchism, taking potshots at the state, without appreciating that without it he would have had no Arches, no Canyonlands, no seemingly “empty” places. He criticized corporate capitalism for its consumerism, but not its production of racialized inequality. Lionizing Abbey today does nothing to bring the redistributive and justice-oriented strands of environmentalism together. Worse, Abbey-worship is likely off-putting to young activists of color and their allies, who see protecting places like Bears Ears National Monument as inextricably linked to addressing the extreme trauma that affects Native people outside of monument boundaries. Abbey thoughtlessly mused that “compulsory birth control” might be a necessary part of the solution to Navajo poverty. Today’s intersectional environmentalists understand that freedom and justice for Navajo women is inseparable from preserving their sacred lands. They are just as likely to work for non-profits serving poor indigenous clients as they are to throw their hearts and souls into protecting public lands. Some do both, practically simultaneously. And so it should be...