The Cigarette: A Political History 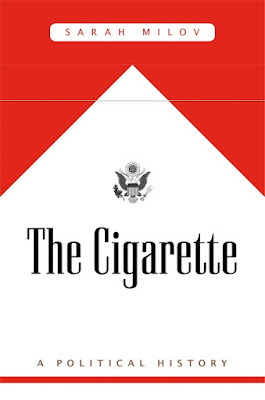 The Cigarette: A Political History (Harvard UP, 2019) by Sarah Milov, co-founder of this blog, was recently reviewed by Reuel Schiller for Jotwell. Schiller writes that Milov's "narrative weaves together legal, political, and economic history in a manner that calls for a revaluation of the dimensions of twentieth-century liberalism and the nature of its decline. The book is a compelling exercise in historical synecdoche: its subject is the political history of the cigarette, but its story is that of the twentieth-century American state." Further excerpts:

Frankly, one could teach a course on twentieth-century legal history using this book as a textbook. It speaks to a broad range of subjects central to the interests of legal historians: the role of law in constituting capitalism; the interaction of law, gender, and race in the construction of social movements; the simultaneously emancipatory and constraining potential of framing policy preferences as rights; the profound role of the administrative state in structuring politics and policy; the rise of public interest litigation; the importance of understanding the legal history of agriculture, a field sorely neglected by legal historians. While different readers will find different analytic points particularly compelling, two stand out for me.

First, Milov’s narrative suggests the need to reevaluate the postwar state’s legal and political contours. For readers familiar with early New Deal policies such as the National Industrial Recovery Act and its industry-written “codes of fair competition,” American tobacco policy is familiar. It was “associationalism” — an interweaving of public and private power that obscured the extent to which private institutions acted as vehicles for public policy. In the traditional narrative of the New Deal, associationalism ended with the political and legal demise of the National Recovery Administration in 1935. Joining scholars such as Brian Balogh, Milov shows how, in fact, associationalism outlasted the NRA and became an integral component of postwar state. Far from being replaced by the light touch of Keynesian fiscal policy, Milov shows how producer-oriented associationalism melded with consumer-oriented Keynsianism to give an alliance of corporate and state interests an active role in structuring the post-war economy as it simultaneously created an illusion of statelessness.

Read more »
Posted by David Schorr at 7:53 PM No comments:

Chinese environmental regulation in the 1970s and '80s

Just appearing online in Environment and History is an artcile by Yun Liu, "Voices of Protest Against Industrial Pollution in Hubei, China, During the 1970s and 1980s". The abstract:


This article examines local official records to find voices of protest against industrial pollution in Hubei, China, during its early reform era from the 1970s to the 1980s. Archival evidence from unpublished official documents indicates that to some extent local officers responded to citizens’ petitions against two main forms of industrial pollution: air pollution and soil pollution. Air pollution mostly affected urban residents but elicited more contention. Soil pollution got comparatively less exposure but caused more direct damage to impacted peasants. Both rural and urban victims of industrial pollution projected their own voices of protest typically by submitting group-authored and signed or anonymous whistle-blowing letters. Protests against pollution emerged with inter-group conflict negotiation in public or semi-public venues as well as in local investigation reports. The findings discussed here help to explain how local environmental governance evolved through increasing public awareness at subnational levels in China’s early reform years.

Dan Ernst (Georgetown Law) regularly posts a long exam question from his legal history course at Legal History Blog. This year's question was on federal grazing policy in the US. Some excerpts:


One of the Forest Service’s first projects was to subject stockmen used to roaming the mountains at will to the principles of forestry.  To develop and defend the new regulations, Pinchot hired, as chief legal officer of the Forest Service, an able and imaginative lawyer, who was personally indebted to him for, among other things, lending him money in the past.  The chief legal officer, who reported directly to Pinchot rather that the more politically connected Solicitor of USDA, soon worked out an ingenious constitutional justification for criminal enforcement of the grazing regulation, turning in part on the claim that the use of the public domain was not a private right but merely a privilege.  In 1908, Pinchot’s lawyer convinced the Department of Justice to bring a test case against a sheepherder named Pierre Grimaud.  A federal district judge ruled that the prosecution violated the nondelegation doctrine.  On direct appeal to the U.S. Supreme Court, the justices at first deadlocked, 4-4.  Pinchot was unfazed.  “I hold it to be the first duty of the public officer to obey the law,” he explained, “but I hold it to be his second duty, and a close second, to do everything the law will let him do for the public good.”  After Charles Evans Hughes and another justice joined the Court, Grimaud was reargued, and, in 1911, the Court upheld the prosecution.  The Forestry Service immediately brought scores of criminal prosecutions, and, by 1912, USDA could report that overgrazing in the forest reserves had ended. 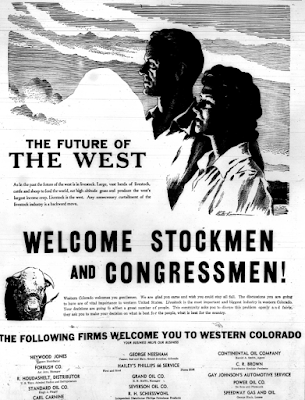 In 1934, the Colorado Cattleman’s Association sent [Farrington] Carpenter to Washington, DC, to lobby Congress to add beef cattle to the Agricultural Adjustment Act’s list of “basic agricultural commodities” and permit them to enter into marketing agreements controlling cattle prices.  Having succeeded, Carpenter stopped by his Congressman Taylor’s office to say his goodbyes, just as the grazing act was having a hearing.  Realizing that Carpenter would be an effective witness and learning that he did not think the public domain should be turned over to the states, Taylor asked him to testify.  (Carpenter was no fan of national power, but he believed that once the land was devolved to the states, different grazing interests would capture different state legislatures and produce an unworkable patchwork of regulation.)  Before the House committee, Carpenter spoke for small-scale cattle stockmen such as himself, plagued by nomadic sheep herds and pushed off public domain by larger cattle outfits.  Federal control was the small stockman’s only chance to avoid being “completely wiped out of existence,” he testified.

When, a few months later, [Secretary of the Interior] Ickes’s undersecretary offered Carpenter the directorship of the new Grazing Division created within the department to enforce the Taylor Grazing Act, Carpenter warned that sheep herders would object to his appointment because he was known as a champion of cattlemen in his corner of Colorado.  He claimed also to have said that he did not intend to create “a great centralized bureau” like the Forest Service, “run by Eastern people who know little about the public domain.”  After consulting a government official who once represented sheep herders, Ickes decided Carpenter would treat them fairly.  Whether Carpenter’s other warning registered with the Interior Secretary Ickes is not known.