Environmental views on the US Supreme Court

A year ago we noted Jed Purdy's review of Jonathan Cannon's Environment in the Balance: The Green Movement and the Supreme Court (Harvard UP, 2014). Now we have Anthony Penna's review of the same in Environmental History. An excerpt: 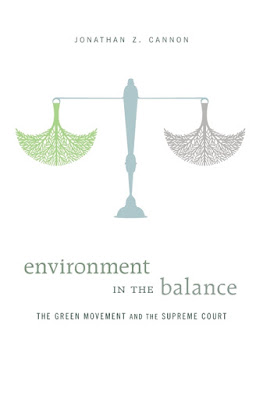 Jonathan Z. Cannon’s Environment in the Balance argues that the majority of the Supreme Court’s decisions regarding environmental legislation reflected a struggle between competing and conflicting beliefs and values. Environmental laws embraced “an ecological model of the world” (p. 1) that posits interconnections among humans and the natural world and seeks to protect it from potentially harmful human activities across place and time. In contrast, the Supreme Court’s conservative majority during the last forty years (highlighted by the appointment of Associate Justice Scalia in 1986) represented a different set of values and beliefs, stressing individualism, property rights, economic growth, and limited government.

Chapter 4, “Law for the Environmental Other,” explores the Court’s findings when the rights of the other conflicts with human use and benefit. In cases in which species protected by the Endangered Species Act, 1964 and the Marine Mammal Protection Act, 1972 were litigated, the Court rejected arguments that reflected Aldo Leopold’s ecocentric perspective.

In Chapter 5, “Efficiency,” Cannon notes that from 1972 to 2007 the Court resisted using cost-benefit-analysis in environmental and worker safety statutes.

Posted by David Schorr at 4:02 PM No comments:

Yesterday we posted on Indian treaties in the northeastern US (and Canada); today it's the Northwest. Michael Blumm recently posted "Indian Treaty Fishing Rights and the Environment: Affirming the Right to Habitat Protection and Restoration". The abstract:


In 1970, twenty-one tribes in the Pacific Northwest, along with their federal trustee, sued the state of Washington, claiming that numerous state actions violated their treaty rights, which assured them “the right of taking fish in common with” white settlers. The tribes and their federal trustee maintained that the treaties of the 1850s guaranteed the tribes 1) a share of fish harvests for both cultural and commercial purposes, 2) inclusion of hatchery fish in that harvest share, and 3) protection of the habitat necessary to provide the fish that were the basis of the bargain which led to peaceful white settlement of the Pacific Northwest. By 1985, the tribes and the trustee convinced the courts of the merits of the first two propositions, but the Ninth Circuit deferred on the third, requiring a specific factual dispute.

Some two decades later, in 2007, the tribes and the federal government convinced district judge Ricardo Martinez that the state’s construction and maintenance of road culverts blocking salmon access to their spawning grounds violated the 1850s treaties. In 2013, after settlement talks failed, the district court issued an injunction that required most of the offending barrier culverts to be remedied within seventeen years, or by 2030. Claiming exaggerated costs of compliance, the state appealed, and in 2016 a unanimous panel of the Ninth Circuit affirmed, rejecting wholesale the state’s allegations. This article discusses the reasoning of both the district court and the Ninth Circuit and makes some assessment of the road ahead, which may implicate road culverts owned by other governments and other habitat-damaging activities like dams, water diversions, and land management actions affecting water quality and quantity.


In September of 1759, great armies were on the move through the upper St. Lawrence Valley. Not the military forces under the command of Montcalm and Wolfe en-route to their climactic showdown on the Plains of Abraham, but an army of black bears migrating en-masse southward from Canada into Britain’s Atlantic colonies. During that autumn, newspapers from New England and New York recorded a southern migration of bears, accompanied by an equally mysterious appearance of thousands of black squirrels. Bears were reported in the city of Boston for the first time in a century—a large bear “the size of small cow” was shot on a Boston wharf as it swam across the harbor from Dorchester Neck.

Bears were “spreading mischief” on colonial farms from the New England frontier to the lower Hudson Valley, devouring fields of “Indian corn” and destroying stocks of hogs, sheep, and calves. British army officers bemoaned frequent bear sightings near General Jeffery Amherst’s field headquarters on Lake Champlain. Newspapers printed lurid tales of a bear attacking and eating two children as they picked beans in a field in Brentwood, New Hampshire. One bear reportedly attacked a female colonist walking near her house, but only made off with the “hind part” of her gown. As much as these armies of marauding bears and squirrels vexed Anglo-American colonists, they provided a critical windfall for indigenous hunters residing beyond New England in the Canadian borderlands and the vast St. Lawrence watershed to the north.

There's a legal angle to this, as well:

Read more »
Posted by David Schorr at 4:17 PM No comments:

Merchants of Doubt - the prequel

Oreskes and Conway's Merchants of Doubt shined a light on how industry employed scientists in recent decades to cast doubt on the reality of environmental and health problems like smoking and climate change. An article by Andrew Perchard & Keith Gildart in last year's Labor History, "'Buying brains and experts': British coal owners, regulatory capture and miners’ health, 1918 – 1946", shows that this problem has been around for a while. The abstract:


This article examines British coal owners’ use of medical and scientific knowledge of occupational lung diseases in the mining industry to resist regulatory changes between 1918 and 1946. It explores the strategies deployed by coal owners in response to scientific and lay debates over the hazard to workers’ health presented by dust, and legislation to compensate miners for pneumoconiosis and silicosis contracted in the nation’s collieries. In particular, it investigates coal owner deployment of the views of notable scientists, especially the eminent physiologist John Scott Haldane (1860–1936), who insisted on the harmlessness of coal dust, in order to avoid costly compensation payments, as well as capital investment in ameliorative measures to reduce miners’ exposure to such hazards. In so doing, the article provides new insights by illustrating how coal owners influenced mining education programmes, deploying the arguments of Haldane and others, with direct implications for health and safety in British mines. This contributed to the mounting public health disaster wrought by coal dust on Britain’s mining communities. This process is viewed as part of the broader political activities of the coal owners – and their industry body, the Mining Association of Great Britain – in its attempts to influence the regulatory process in a period of dramatic change in the political economy of coal.

Posted by David Schorr at 10:15 PM No comments: