Friday saw the passing of one of the greats of Israeli law, former Justice and President of the Supreme Court Meir Shamgar. Shamgar has been eulogized elsewhere, mainly with regard to his many important contributions to constitutional law and public law in general, but I'd like to shine a light on an important decision of his in an environmental nuisance case, about which I've written (in Hebrew). (I hope the case will be translated into English soon.)

Ata v Schwartz (1976) is an Israeli classic. Briefly put, Schwartz sued a neighboring textile factory, the largest in Israel at the time; asking for an injunction against the noise emitted by its cooling and ventilation systems. Despite the factory's warning that granting the injunction would lead to the layoff of thousands of workers, the trial court as well as the two appeals courts that considered the case upheld Schwartz's right to an injunction, noting that the relevant statute rejected a "balance of the equities" test for permanent injunctions, and emphasizing the importance of every person's right to live free of harsh disturbances.

What makes the case a chestnut for teaching, beyond the stark facts and bold result, is Justice Shamgar's discussion in his decision for the Supreme Court of the then-new economic approach to law. Unbidden by the parties, Shamgar linked the defendants' claim that an injunction should be granted only if the balance of the equities was in the plaintiff's favor (i.e. that the harm eliminated by the injunction would be greater than the cost of complying with it) to classic arguments by Ronald Coase, Richard Posner, and Guido Calabresi (with Douglas Melamed), arguing for wealth- or utility-maximization as the guiding principle of nuisance law. I write "classic arguments", but Shamgar's decision was really the first (in the world) to discuss the works of these authors at any length. Why "the law and economics movement" received its first substantial treatment in an Israeli, and not an American, court is a subject for another time.
Posted by David Schorr at 11:04 AM No comments:


In 1969, a public debate between President Nixon and Congress took place during the legislative passage of the National Environmental Policy Act and centered on two very different and competing conceptions of how presidential advice should be organized in the Executive Office of the President. It focused on the proposed establishment of the Council on Environmental Quality. The outcome of the ensuing battle represented a complete victory for congressional interests against the expressed wishes of the president. The nature of the debate has been overlooked in the literature on the presidency, but it highlights fundamental issues about agency design and presidential control of the institutional presidency. It also highlights broader concerns about the degree of congressional involvement in shaping the Executive Office of the President.

Posted by David Schorr at 4:59 PM No comments:

Tonight and tomorrow are the Jewish High Holiday of Yom Kippur, the Day of Atonement. In a recent debate about Israeli climate change policy my colleague at TAU, Pinchas Alpert, invoked a seasonal analogy based on a passage from Maimonides, the great medieval Jewish jurist and philosopher.

An article by Nadav Feldman in The Marker Magazine (in Hebrew) quotes an Israeli religious neoliberal blogger (yes, that American combination has recently reached Israel, thanks to American funding) as arguing that Israel should not take any regulatory action against greenhouse gas emissions. His lead argument is that Israel's contribution to global emissions is but a small proportion of global emissions, so any action taken by Israel will impose local costs without bringing about any benefit.

In response, Alpert, a climate scientist, points to a passage from Maimonides's Laws of Repentance, which many Jews study this time of year. Maimonides writes (3:4, transl. Eliyahu Touger):

So, too, for environmental issues such as climate change, argues Alpert, every person's contribution to the problem or its solution is decisive, and we each need to see ourselves as responsible for our current predicament.

May we all be sealed in the book of life.
Posted by David Schorr at 11:54 AM No comments:

A plea for more historical awareness in environmental law 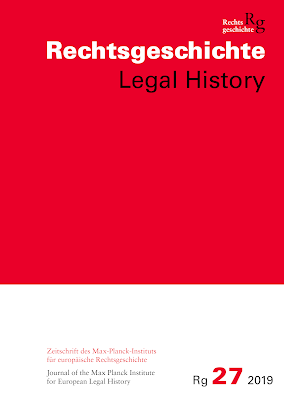 The latest issue of Rechtsgeschichte has a generous review by Jan-Henrik Meyer of my chapter in the Oxford Handbook of Legal History, "Historical Analysis in Environmental Law". Meyer writes:


Schorr ascribes the lack of historical awareness to the apparent novelty of the subject area. Environmental law as a field only emerged in the wake of what already some of the contemporaries self-confidently described as the »environmental revolution« of the early 1970s. In a short span of time, roughly between 1969 and 1973, promoted by international organisations such as the OECD, NATO, the United Nations (UN) and pace-setting governments – notably the United States and Sweden – the environment emerged as a new area of policy and legislation. New institutions such as environmental agencies and ministries were established. Ambitious environmental action programmes were drafted, outlining legislative and administrative measures. The nascent environmental movement first gathered internationally around the UN Conference in Stockholm in 1972. Environmentalists critically observed and pushed these new institutions to make and shape the new environmental law. Consequently, environmental law quickly became a new subfield within government administrations, legal practice, the courts and legal scholarship.

The apparent novelty of environmental law tends to induce environmental lawyers to discount the importance of history, Schorr rightly argues. Not only do environmental lawyers frequently ignore the longer-term historical legacy, they also tend to forget that conflicts about and regulations concerning the use and abuse of nature and natural resources are not something altogether new. Schorr deplores that practitioners in particular tend to refrain from using history and historical precedent as an »argument«. This is both counterproductive and counterintuitive in the field of law, where arguing with precedent is standard practice, as many non-lawyers were reminded recently when the House of Commons’ speaker John Bercow’s mobilised 17th-century precedents of parliamentary procedures to fend off a third Brexit vote.

David Schorr is aptly placed to raise such a critique, as he is one of the few specialists of both legal history and environmental law. Schorr’s point of departure is thus a plea for a greater historical awareness in environmental law and among environmental lawyers. He convincingly argues that a longue durée view of environmental law avant la lettre would be extremely insightful. Scholars and practitioners should consider the large body of rules and regulations on nature, property, nuisances, pollution and resources produced long before such norms were actually defined as and subsumed under the new umbrella of »environmental law« in the early 1970s.

Schorr convincingly demonstrates the extent to which legal historical scholarship remains isolated from the burgeoning interdisciplinary field of environmental humanities. He is right in diagnosing a lack of dialogue with environmental history, a growing field in which legal and political aspects of human interaction have always featured prominently. For decades now, environmental historians have analysed legal texts as sources for understanding human use of natural resources, for instance, through forest codes, water laws or human attempts to protect public health through rules for urban sanitation. Such proto-environmental law often dates back to the Middle Ages or the early modern period.

Even environmental history research focusing on more recent decades involves the law: Environmental movements often pressed for legislation or used the courts, for instance, to stop the construction of nuclear power plants. Indeed, the existing legal scholarship on such issues is largely from the 1980s, when activist lawyers or administrative lawyers specialising on such issues followed up on current developments. Thus Schorr’s plea for more mutual awareness and interdisciplinary collaboration between environmental history and legal history – putting together the skills and expertise of both disciplines – is very timely. Such long-overdue cooperation is something also the author of this review is committed to.

There is a sense of both scholarly and political purpose to Schorr’s final plea for a renewed emphasis on legal historical research and to using historical knowledge thus generated as an argument in legal and (thus) political debates. Three issues, he argues, are at stake: First, deepening historical knowledge is necessary and useful to better understand current environmental law. At first sight, his argument about making history relevant seems very convincing. Many political claims, such as the supposed superiority of private (vs. state) regulation, could be put to a test, with the historical record acting as a referee. However, such a view treats history as an ancillary force whose main purpose is to provide empirical evidence to back certain arguments in theoretical and political discussions. Many self-respecting environmental and legal historians would frown upon ascribing history such a role. They would also highlight methodological issues – such as anachronistically applying a clear binary distinction of public vs. private rule-making to pre-modern times, or point to contextual factors that make a comparison across time highly problematic.

Read more »
Posted by David Schorr at 2:16 PM No comments:

Was the Lochner Court pro-environmental?

In a recent post at Legal Planet, Dan Farber writes about "pro-environmental" decisions of the US Supreme Court in the Lochner era (roughly 1900-1935), on a wide range of topics: nuisance, takings, wildlife conservation, and public lands. Farber writes that "it is somewhat startling to see just how often the famously conservative Court of that time took the side of environmental protection."

Farber's post raises a host of questions:
Are these cases representative?
"Lochner revisionism" has been in full swing for a while now - does a pro-environment stance support either the traditional or the revisionist view of the era?
Are the legal doctrines invoked in the environmental cases at odds with those behind the court's decisions in areas such as labor law?
Could analyses of the court's opinions based on class, economics, or cultural factors explain the supposed discrepancies? And so on.


After this was posted, I learned that Professor Kimberly Smith at Carleton College has actually written a book on the subject, which will appear in October from Kansas University Press.  As she told me, The Conservation Constitution traces how, between 1870 and 1930, the conservation movement reshaped constitutional doctrine to support expanded state and federal authority to protect natural resources. In striking contrast to the usual “Lochner Era” story, she finds that the federal courts during this period were largely supportive of conservation policy. She argues that this favorable attitude owes a great deal to the scientific reputation of the USDA and the talented group of lawyers supporting conservation policy.  I’m eagerly looking forward to reading the book.

Posted by David Schorr at 8:20 PM No comments: