The law and species classification

The journal Isis recently published an article by Peter Alagona, "Species Complex: Classification and Conservation in American Environmental History". I heard Peter give a fascinating talk on this at a conference a while back, in which he explained that while scientists don't really have a good definition for what a species is, the law (e.g. the US Endangered Species Act) requires organisms to be classified into species, thus driving this seemingly "scientific" endeavor. The article abstract:


How does the classification of biological organisms shape efforts to conserve them? This essay addresses this key question through the scientific, administrative, and legal histories of steelhead and rainbow trout. Members of the diverse salmon family, these two fish have different life histories and physical appearances, but since the 1930s scientists have considered them the same species. Over the past 150 years, however, their histories diverged. Today, rainbow trout are bred by the millions in hatcheries and are among the world’s most common and widespread fish, while steelhead are listed as threatened or endangered all along the West Coast of the United States. Their remarkable story shows that conservation is not merely a political struggle over things that exist in nature; it is a perennial competition to prove the existence and define the very nature of those things that are the focus of such struggles. Biological taxonomy and classification are central to these debates, as they are to environmental history and the history of science more generally. 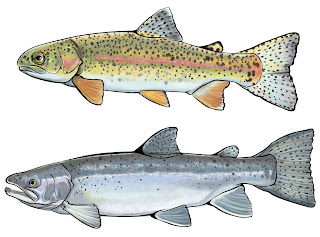 And some of the legal history in the article:


During the first decade of the twentieth century, California law distinguished between steelhead and rainbow trout, assigning different seasons and catch limits to each. For anglers, whose numbers were growing by the year, this created a quandary. The Los Angeles Times mocked the state’s distinction between steelhead and rainbows as “foolish[,] … for an angler has never found a bait which will attract one variety of trout and repulse another.” As for the difference in fishing seasons, the Times asked if fishermen should somehow attempt to “shoo away” hungry rainbows during the month of April, when the law permitted fishing for steelhead but not their freshwater brethren.

Two questions were at stake in this early regulatory debate. Were steelhead and rainbows the same species? And, regardless of their taxonomic status, should the state regulate them in the same way? David Starr Jordan had recently stated that he believed the two were the same species, and, according to the Times, most anglers accepted Jordan’s expert opinion. But consent was far from universal. Edwin L. Hedderly, of the Los Angeles Herald, for example, claimed that he had “not yet found a trout fisherman who agreed with this view.” Fishermen may have differed on the taxonomic question, but they agreed that one set of regulations was essential so that well-meaning anglers would not risk violating the law. They got their wish, between 1909 and 1911, when the state reclassified all trout in coastal streams as steelhead and instituted a uniform set of regulations. Whether or not scientists believed that steelhead and rainbows were the same species, the state would manage them as such.