The new issue of American Historical Review has a review by Christine Corton of William Cavert's The Smoke of London: Energy and Environment in the Early Modern City (Cambridge UP, 2016). Corton writes: 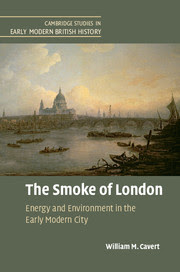 Cavert looks at the early legal debates, many initiated by personal complaints from Elizabeth I and Charles I, aimed at limiting smoky industries located near the Royal Palaces. Charles II shared his father’s dislike of coal smoke, but “measures against it were limited, local, sporadic, and rearguard” (190), not least because Charles was more interested in projects outside the capital city in Windsor or Greenwich. Such preferences marked the failure of earlier attempts to limit smoky industries within London.

The situation changed gradually as local magistrates became more interested in cleaning London’s air to benefit health and to protect buildings. But these early attempts to legislate started a pattern that was to be followed during later centuries as attempts to reduce smoke failed to be passed into law. For many people, a major part of the problem was that the smoke pouring from workshops signified industrial success and full employment, just as smoke issuing from domestic chimneys registered prosperity and cozy domesticity, a relationship only hinted at in Cavert’s book.

Other, wealthier individuals also tried to limit the number of smoke-emitting industries located near their own dwellings. New developments in the west of London, such as Covent Garden, prohibited smoky trades from the outset in order to attract a higher class of resident. Urban settlements created for and by social and political elites partly explain why London’s East End suffered more from the West End’s smoke, as the vapors from the increasing number of domestic dwellings were blown eastward by the prevailing winds.

This book is not about the mixture of smoke with the natural damp atmosphere of London that produced London fogs, the “pea-soupers,” which became frequent and dense from the 1830s onward; it is about specific smoke nuisances from industries such as breweries, soap producers, tanners, and glass and brick manufacturers whose smoke poured into neighboring houses, ruining their furnishings and clogging up their inhabitants’ lungs. People who were part of these earlier centuries were not environmentally apathetic, and they attempted to control or even curb the filthy smoke because many were personally affected. Cavert shows the development from initial attempts to protect the city’s air and beauty to wider projects. All of this sets the scene for later battles as industry in London expanded and domestic hearths increased, which culminated in the Clean Air Act of 1956.

For more on the topic see here and here.
Posted by David Schorr at 7:00 AM