The journal Western Legal History (unfortunately not available online) recently published a special issue on Southern California water, in honor of the late historian Norris Hundley, edited by Peter Reich. The issue's articles all raise interesting issues at the intersection of environment, law, and history, so I'll try to cover them here one by one. 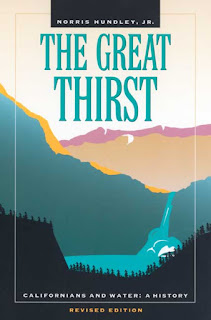 Peter Reich's introductory essay begins by noting developments in the field of western (US) water history since a 1996 special issue of Western Legal History on the topic. He begins by noting the influence of two books published in 1992, Hundley's The Great Thirst and Donald Pisani's To Reclaim a Divided West:

In the two decades since, scholarship on this topic has proliferated, particularly on geographical areas crossing state lines and international boundaries.... [Recent work in the field] build upon Norris Hundley's lifetime evaluation of the dialectic between private rights and government water control over a range of geographic contexts from the local to the transnational.

Reich goes on to survey several books with a regional, interstate perspective (some including Mexico), as well as several focusing on specific territories or states. More on the latter topic later.
Posted by David Schorr at 7:00 PM