Legal History Blog noted yesterday the New York Times review by Louis Bayard of David Randall's The King and Queen of Malibu: The True Story of the Battle for Paradise (Norton, 2016). The publisher's website describes the book: 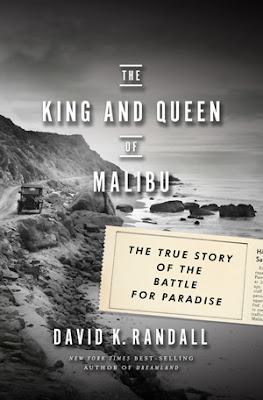 Frederick and May Rindge, the unlikely couple whose love story propelled Malibu’s transformation from an untamed ranch in the middle of nowhere to a paradise seeded with movie stars, are at the heart of this story of American grit and determinism....

The newly married couple reached Los Angeles in 1887 when it was still a frontier, and within a few years Frederick, the only heir to an immense Boston fortune, became one of the wealthiest men in the state. After his sudden death in 1905, May spent the next thirty years fighting off some of the most powerful men in the country—as well as fissures within her own family—to preserve Malibu as her private kingdom. Her struggle, one of the longest over land in California history, would culminate in a landmark Supreme Court decision and lead to the creation of the Pacific Coast Highway.


Stubborn, isolated and innately distrustful, May couldn’t grasp that her prerogatives as property owner were being challenged by a new birthright, coaxed into being by the rise of the automobile: the right to beauty. Or, to quote the 1923 Supreme Court decision [Rindge Co. v. Los Angeles] that killed off May Rindge’s last hopes (and fortune): “Public uses are not limited, in the modern view, to matters of mere business necessity and ordinary convenience, but may extend to matters of public health, recreation and enjoyment.”

In other words, the government had a right to Malibu because the place was too wonderful to sit on. It took only six years for an actual road to materialize, and with it came the movie stars and the surfers and the billionaires and all the other fauna we associate with this pristine stretch of sand where, thanks to a south-facing shoreline, you need never squint into the sun.

But May Rindge’s legacy of cussedness and exclusion lives on. Her unfinished mansion has been reborn as a gated community, and in an atavistic echo of old battles, Malibu’s newest homeowners are once again working to seal off public access to their coastline.