Two on the American administrative state

First is Dan Ernst's Tocqueville’s Nightmare: The Administrative State Emerges in America, 1900-1940 (OUP, 2014). The press writes that Ernst shows that: the principles of individual rights, limited government, and due process were built into the administrative state. Far from following "un-American" models, American state-builders rejected the leading European scheme for constraining government, the Rechtsstaat (a state of rules). Instead, they looked to an Anglo-American tradition that equated the rule of law with the rule of courts and counted on judges to review the bases for administrators' decisions. Soon, however, even judges realized that strict judicial review shifted to courts decisions best left to experts. The most masterful judges, including Charles Evans Hughes, Chief Justice of the United States from 1930 to 1941, ultimately decided that a "day in court" was unnecessary if individuals had already had a "day in commission" where the fundamentals of due process and fair play prevailed. This procedural notion of the rule of law not only solved the judges' puzzle of reconciling bureaucracy and freedom. It also assured lawyers that their expertise in the ways of the courts would remain valuable, and professional politicians that presidents would not use administratively distributed largess as an independent source of political power.

Next is Philip Hamburger's Is Administrative Law Unlawful? (U Chicago Press, 2014). The Press describes the book's modest claims: 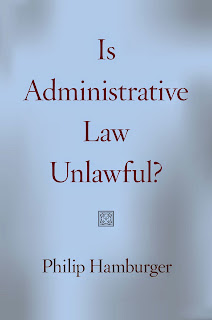 With Is Administrative Law Unlawful?, Philip Hamburger answers this question in the affirmative, offering a revisionist account of administrative law. Rather than accepting it as a novel power necessitated by modern society, he locates its origins in the medieval and early modern English tradition of royal prerogative. Then he traces resistance to administrative law from the Middle Ages to the present. Medieval parliaments periodically tried to confine the Crown to governing through regular law, but the most effective response was the seventeenth-century development of English constitutional law, which concluded that the government could rule only through the law of the land and the courts, not through administrative edicts. Although the US Constitution pursued this conclusion even more vigorously, administrative power reemerged in the Progressive and New Deal Eras. Since then, Hamburger argues, administrative law has returned American government and society to precisely the sort of consolidated or absolute power that the US Constitution—and constitutions in general—were designed to prevent.

With a clear yet many-layered argument that draws on history, law, and legal thought, Is Administrative Law Unlawful? reveals administrative law to be not a benign, natural outgrowth of contemporary government but a pernicious—and profoundly unlawful—return to dangerous pre-constitutional absolutism.