H-Environment recently re-posted its roundtable reviews of Andrew Kahrl, "The Land Was Ours: African American Beaches from Jim Crow to the Sunbelt South" (Harvard UP, 2012). (See the HUP blog for an interesting historical piece on the Trayvon Martin case by Kahrl.) Jacob Hamblin describes the book: 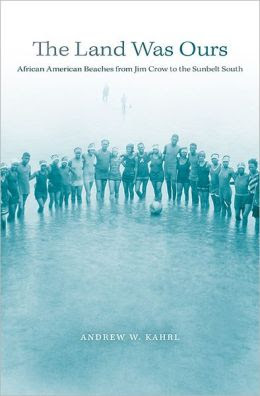 In The Land Was Ours, Andrew W. Kahrl sees the coastal American South as an ideal way to explore the interconnections between race, space, and environmental change. It was there that, during the Jim Crow era, African Americans had an enormous yet under--‐studied connection to land and sea, largely because privileged whites tended to avoid such land. And yet over time African Americans lost control to resort developers, for complex reasons that involve whites and blacks seeking political and economic opportunities in a natural environment that itself was changing. For Kahrl, it is a tale that compels us not only to see injustice, but also to related African American experiences to other processes in such as the commodification of beaches, the creation of unsustainable environmental practices, and the interaction between culture and place.

Some tastes of the reviews. Sarah Elkind notes:


In spite of the importance of public ownership in creating and preserving recreational space in the long term, private ownership provided better recreational opportunities for minorities for much of the twentieth century than public lands did. Public Jim Crow beaches were dangerous, polluted and inaccessible. Even national parks were racially segregated during the first half of the twentieth century.
Nonetheless, private resorts faced challenges of their own: undercapitalization; rising property values; coastal engineering; and the management difficulties caused by individual property-owners who insisted upon their property rights even when they violated a resort’s carefully constructed land-use rules. Even when families owned land communally as heirs’ property, ambitious developers – be they family members or outside opportunists -- could force the sale and eviction of those still living on and using the land. All of these cases reinforce Kahrl’s larger point about broad American participation in commodification of nature and its social consequences.


Andrew Kahrl has written a persuasive book about power and property. Business minded property owners, investors, doctors and lawyers – African Americans and whites – made choices about and engaged over a commodity that carried with it notions of respectability and freedom. That commodity – land – was culturally defined by powerful legal and financial instruments that were as rigid as they were twisted or presumed to be colorblind. Many of these leisure based recreation ventures – such as riverboats – were undercapitalized and operated on a razor sharp margin because African American entrepreneurs often purchased sub-par vessels or property at high prices on credit extended from white investors who demanded aggressive repayment terms. Plus, vessels sank and buildings burned – sometimes by accident and sometimes a result of arson – while insurance policies, if there were any, did not cover replacement costs. In another example, “tenancies in common” (or heirs’ property) became a popular legal arrangement among African American property owners that complicated land title in the long-run: when owners died, all survivors inherited a fraction of the original owner’s share. And all shareholders – including those who might not even physically reside on the property – had an equal legal standing. As such, conniving black and white speculators learned how to approach heirs with no physical connection to the property, accumulate shares, and force the sale of coastal properties. Finally, banks did not underwrite construction or home loans for improvements to heirs’ property because titles were not clean. Unable to improve their land, many African Americans were compelled to sell as property values and tax assessments increased in the Sunbelt era. While this book is primarily about the political economy of African American land ownership and segregated leisure space during the long civil rights movement, environmental historians can use these stories of progress and decline in coastal zones as a launching point.