Eric Berndt and Daniel Aldrich have posted "Power to the People or Regulatory Ratcheting? Explaining the Success (or Failure) of Attempts to Site Commercial U.S. Nuclear Power Plants: 1954-1996". The abstract: 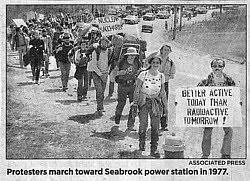 Between 1954 and 1996, more than 200 nuclear power projects were publically announced in the United States. Barely half of these projects, however, were ever completed and generated power commercially. Past research has raised a number of potential explanations for the varying siting outcomes of these projects, including contentious political protest, socioeconomic and political conditions within potential host communities, regulatory changes (“ratcheting”) and the cost overruns associated with reactors. This article uses a new, sui generis data set of more than 210 cases of actual and potential host communities over time to illuminate the regional and national variables which led to successful siting (or failure). Controlling for factors highlighted by past studies, we find that regulatory, collective action, and reactor-specific factors best predict the outcomes of attempts to site nuclear reactors over this time period. These findings have important implications in the post-Fukushima “nuclear renaissance” era when many still hope to revitalize the nuclear industry in the US and abroad.