Environmental History's "New Scholarship" section alerted me to James Longhurst's "The Sidepath Not Taken: Bicycles, Taxes, and the Rhetoric of the Public Good in the 1890s", from the October, 2013 issue of the Journal of Policy History. Longhurst writes (citations omitted): 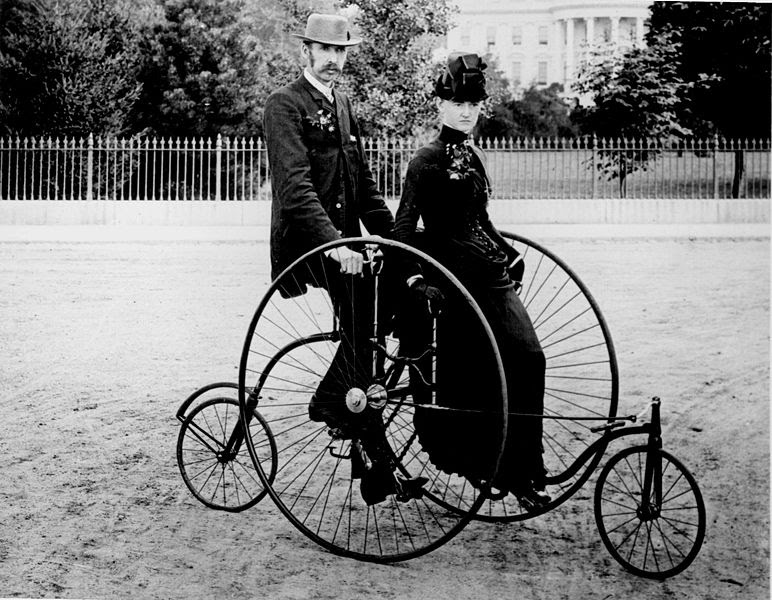 For a brief moment at the end of the 1890s, an alternative vision of the future of American transportation flickered to life, and then faded. Bicyclists dissatisfied with the haphazardly maintained, locally financed, and unpaved roads of the nineteenth century first proposed to build their own recreational paths through private, voluntary efforts. But by the end of the decade, supporters of the sidepath movement imagined cities and towns connected not only by roads but also by a separate, bicycle-specific network of improved paths. These paths were to be protected by state law and funded by innovative public/private cooperation on the county and local level, combining earlier voluntary efforts with an institutionalized user-fee model. In a now-forgotten national magazine, some sidepath promoters concentrated on the recreational aspects of interurban paths, while others emphasized the possibilities for personal transportation and practical commuting within cities before the existence of an affordable and reliable automobile. Sidepath networks were built first by taxing cyclists at the county level in northwestern New York, but the passage of user-fee legislation in 1899 provided a template adopted by states across the nation. Sidepath building briefly flourished in Chicago, Minneapolis, Portland, and elsewhere, leading excited cyclists to imagine a network of paths allowing them to “go from New York to any point in Maine, Florida or California on smooth roads made especially for them.” While these dreams were expansive, the movement was severely limited by the persistent problem of convincing politicians and the populace that the construction of infrastructure for a small number of individuals was a “public good.” Development floundered by 1905, as fewer cyclists made voluntary contributions to the project. Most sidepath advocates then threw their lot with farmers and other powerful stakeholders in a combined-use Good Roads movement, abandoning their separate system. When the automobile later came to dominate those combined-use roads, cities slowly became increasingly auto-centric throughout the twentieth century. Had it been successful, a separate sidepath system would have changed American history. But it was a sidepath not taken.

This article focuses on policy aspects of the forgotten sidepath movement, including taxation and growing state power, but especially examining debates over defining the boundaries of the “public good.” While these issues surfaced in the sidepath fights, demarcating public and private goods has been a long-term project, and this historical analysis inevitably ends up using policy terminology developed after the fact. Half a century after the sidepath movement, academics in the field of economics began to classify some goods and services within a conceptual matrix. This approach posited that a “public good” was any shared resource or project whose benefits could not justifiably be denied to any subset of the entire populace, and whose consumption by some did not overly inconvenience the rest. Clean air, the safety provided by military defense, the navigational assistance provided by a lighthouse—these could be described as public goods, and most societies approve of state support for their provision to all. In contrast, private goods could justifiably be limited to a select few who paid, in one way or another, for additional access to a limited resource. Today, the academic terminology of excludable resources, nonrivalrous usage, and free riders is applied to debates over public expenditures, though without clearly solving disagreements. But long before the development of this language, Americans struggled with the underlying issues. They fought to define the boundaries of the public good in their state legislatures and local newspapers, and bicycle paths became an unlikely battleground in that conflict.