Today we have a guest post from Dan Allosso, a PhD candidate in history who runs the new www.environmentalhistory.us website, which has video lectures, a blog, and reviews of important books in environmental history. Dan recently reviewed one of the most important books of legal history, Morton Horwitz's The Transformation of American Law, 1780-1860 (Harvard UP, 1977), as well as Ted Steinberg's Nature Incorporated: Industrialization and the Waters of New England (U Mass Press, 1994). He put together a condensed version for our blog:

Harvard Law professor Morton Horwitz’s The Transformation of American Law, 1780-1860 is not an Environmental History text, per se. Nor is it a well-known volume outside legal history circles, in spite of winning the Bancroft Prize in 1978. It’s not an easy read, but it tells an important story, which was amplified by Horwitz’s student Ted Steinberg in the EH classic, Nature Incorporated. 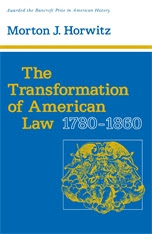 Horwitz argues a fairly radical case, which unfortunately is not widely understood because of the book’s subject matter and style. Horwitz focuses on common law. Constitutional law, he says, “represents episodic legal intervention buttressed by a rhetorical tradition that is often an unreliable guide to the slower (and often more unconscious) processes of legal change in America” (xii). Constitutional law also focuses on judicial review, rather than what Horwitz characterizes as a very active, constructive, legislative role taken on by nineteenth century jurists. “By 1820,” he says, “the process of common law decision making had taken on many of the qualities of legislation. As judges began to conceive of common law adjudication as a process of making and not merely discovering legal rules, they were led to frame general doctrines based on a self-conscious consideration of social and economic policies” (2). The ancient tradition of “an eternal set of principles expressed in custom and derived from natural law” gave way to an understanding of law as “an instrument of policy” that could be used “for governing society and promoting socially desirable conduct” (30). Once this change had been accomplished, the game became defining the terms “socially desirable.”

Horwitz’s depiction of the law as a battleground for class war, and of court decisions as the tools of legislation and social engineering, deserve to be more widely appreciated. Ted Steinberg’s Nature Incorporated, based on his dissertation (for advisors David Hackett Fischer, Morton Horwitz, and Donald Worster), argued that “industrial capitalism is not only an economic system, but a system of ecological relations as well” (11). This idea goes beyond the obvious (but important) recognition that the environment influences social and economic choices, toward a more subtle discussion of how “the natural world came to represent new sources of energy and raw materials [that were] perceived more and more as a set of inputs.” Steinberg mentions Environmental Historians William Cronon and Carolyn Merchant in this context, but the thrust of his argument develops Horwitz’s theme of “an instrumental conception” of both resources and the “law that sanctioned the maximization of economic growth” (16). Basically, Steinberg takes Horwitz’s argument that the law became a servant of economic progress and extends it to the natural world, which also became an “instrument” of particular human designs rather than a common ground shared equally by all.

Steinberg’s story of the beginning of textile milling in Massachusetts calls attention to the contested nature of all the changes the mills tried to make to the flow and control of rivers like the Charles. How and why people reacted to these sneaky changes in the social contract was the element missing from Horwitz’s story. Steinberg begins filling in the details, including the story of how the Boston Manufacturing Company used the legal system to settle what amounted to a class-action lawsuit in 1848, by paying $26,000 to get permanent uncontested control of the Merrimack River. In 1850, as a result of this uncontested control of what was once a common resource, the BMC made $14 million. This seems like such a typical issue today: a corporation (which is technically immortal) uses the courts to buy off the people it has injured with a pile of cash that seems significant to them, but is actually minuscule in comparison to the damage the corporation has evaded responsibility for. How many superfund sites, oil spills, and industrial accidents have been bailed out over the years by this trick, I wonder?

(See Dan's "Library" section for the full reviews of Horwitz's and Steinberg's books.)