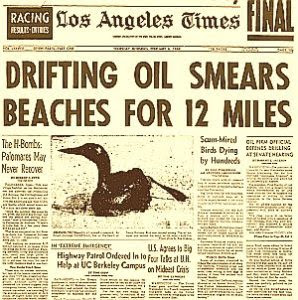 Richard Frank posted yesterday at Legal Planet on the 50th anniversary of the Santa Barbara oil spill. Some excerpts:


In many ways, however, the January 1969 Santa Barbara spill remains the most consequential and transformative environmental disaster in American history.  That’s true for several related reasons.  First, it was the inaugural such environmental disaster captured and broadcast into millions of U.S. households on the evening news.  For weeks, the major TV networks provided gripping, daily accounts of the biological damage and adverse economic effects produced by the Platform A blowout.  And that had a profound effect on the national psyche, with televised footage of dead and dying animals, fouled beaches and oil-saturated ocean waters underscoring in the most stark way the myriad costs associated with oil and gas development in coastal waters.

Second, the Santa Barbara oil spill provoked a strong and immediate response from government leaders.  Local officials complained bitterly to the media and public about the lack of adequate environmental controls and oil spill response efforts, noting presciently that the federal government that had issued the oil and gas leases–thereby earning substantial royalties from the oil companies’ offshore development activities–had an inherent conflict of interest when it came to regulatory oversight of those same activities.  Federal officials had a more muted reaction to the spill: President Richard Nixon visited the area to view the spill and cleanup efforts on March 21st, telling the assembled crowd, “…the Santa Barbara incident has frankly touched the conscience of the American people.”  But on April 1st, a hastily-adopted, temporary federal drilling ban was lifted, and oil and gas development in federal waters resumed off the California coast.

Longer term, however, the Santa Barbara spill would have a direct and positive effect on American environmental policy and law.  Later that year, Congress would enact the National Environmental Policy Act (also a half century old this year).  And NEPA was but the first in a torrent of environmental legislation passed by Congress over the next decade–including the Clean Air Act, Clean Water Act and Endangered Species Act–that to this day remains the basic framework of federal environmental law.

The Santa Barbara oil spill also catalyzed a state government response that quickly made California a national and international leader when it comes to environmental policy and law.  In the immediate wake of the disaster, the Republican-dominated California Legislature created an interim Committee on Environmental Quality, directing it to develop recommendations for state environmental legislation.  The most important outgrowth of that initiative was passage in 1970 of the California Environmental Quality Act; modeled on but significantly stronger than NEPA; CEQA remains California’s most important, cross-cutting environmental law, as well as the most powerful “little NEPA” statute in the nation.  And when the California Legislature balked at passing a law specifically designed to prevent ocean and coastal damage exemplified by the Santa Barbara oil spill, state voters responded by enacting an initiative measure in 1972 creating the California Coastal Commission and the most powerful system of coastal regulation and preservation in the nation.