Legal Planet recently mentioned the University of Oregon's International Environmental Agreements Database Project. The project has a ton of information on environmental treaties, including lists of treaties by date, subject, and lineage; a library of historical documents on marine mammal protection; and more.

The graph below (click here for a larger version), taken from the main page of the website, charts the number of of environmental treaties, protocols, and amendments by decade (up to 1950) and then by five-year period. The quantitative data highlight some features that beg for some interpretation and context: A small surge in activity in the 1890s (not surpassed until the 1940s), a huge jump in the 1950s (more than three times the activity than the preceding decade), and a continuing drop since the mid-1990s peak (presumably associated with the 1992 Rio Earth Summit). 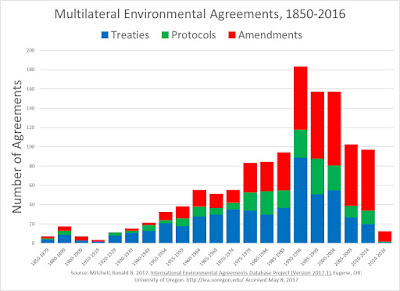 Thoughts anyone?
Posted by David Schorr at 2:28 PM