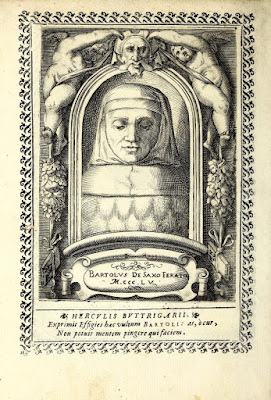 After beginning the digital library of historical environmental law with works from the last few hundred years, we go back in time this week to the fourteenth century and the Tractatus de fluminibus seu Tyberiadis (1355, 1576 edition (source of the images in this post) here) of the great medieval Italian jurist Bartolus of Saxoferrato.

As Bartolus explained at the beginning of the work, he was inspired to write the book while on vacation near Perugia, despite his attempts to enjoy his vacation and stay away from legal scholarship:


This river [Tiber]... circles that splendid mountain on which the city of Perugia is situated and while flowing a great distance through its district, the river itself is bordered by plains, hills and similar places. These places are also well inhabited, enhanced with many beautiful buildings and luscious orchards bearing lots of fruit. Thus, when I was resting from my lecturing and in order to relax, was travelling towards a certain villa situated near Perugia above the Tiber, I began to contemplate the bends of the Tiber, its alluvion, the islands arising in the river, the changes of the river-bed as well as a host of unanswered questions which I had come across in practice. There were also other matters, which came to mind from my own observance of the river. I began to consider in various ways what the legal position was, not believing that I would take it any further, lest not to spoil my vacation, the reason why I had come. And thus while I slept that night, I had a vision near dawn that a certain man, whose countenance I found gentle, came to me and he said the following: "Write down what you have begun to think about and since there is a need for illustration, provide mathematical diagrams: Look! I have brought you a reed pen to measure and draw circles as well as a ruler to draw lines and to construct diagrams". I told him to spare me from illustrating legal matters with geometrical diagrams, since were I to do that, there would be many more scoffers than supporters. Then, looking at me with a troubled countenance, he said: "Bartolus, I know that you have something (in you) of God, but are you indeed afraid to be ridiculed for your service?

After being convinced by his nocturnal visitor not to shirk from the work,


I got up and trusting in the good will of Him who had promised that he would be with me in the execution, I started that work and named the whole treatise the Tyberiadis in order not only to discuss problems concerning the Tiber itself, but also many other problems occurring in the region of the Tiber. I reckoned that just as all laws originate from the city of Rome, in like manner, what is said about the Roman river Tiber, could also be applied to all other rivers.

The work is a word-by-word commentary on a passage of Gaius from Justinian's Digest, and contains three sections:


The first, known to historians of European law as De alluvione (On Alluvial Deposits), explains how to divide equitably the alluvial deposits a river made available; the second, De insula (On Island), how to divide an island born in the middle of a river among the landowners on both sides of the river; and the third, De alveo (On Riverbed), discusses issues related to an abandoned riverbed. (Osvaldo Cavallar, "River of Law: Bartolus's Tiberiadis (De alluvione)", p. 34)

One interesting feature of the book is its combination of law and geometry, as Cavallar explains: 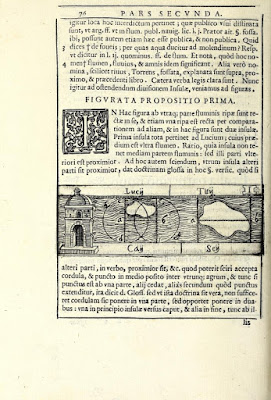 Bartolus's book was reprinted many times (see for example the German version here), and the section on alluvion was translated into English (whence the quotes above) by Paul Jacobus du Plessis. Du Plessis explains the contemporary relevance of the work in South Africa:


South African common law represents a European ius commune based upon Roman law  and Roman-Dutch law of the seventeenth century. Included within South African  common law is a large volume of medieval commentaries on Roman law, rarely touched  upon by legal historians.... The text is concerned with alluvion, an original mode of acquisition of ownership,  which is still relevant in contemporary South African law and has recently been  perpetuated in section 33 of the Land Survey Act 8 of 1997. 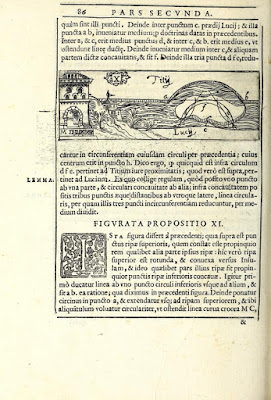