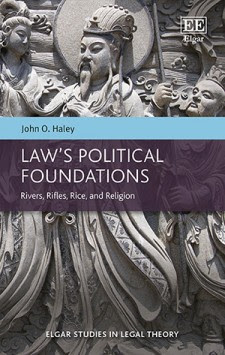 In this extraordinarily sweeping volume, Haley analyzes and discusses how certain legal and political systems historically evolved in varying ways. Importantly, these systems share common threads when it comes to the political foundations of their law and the modes of their law's enforcement. Haley explains and compares three, which he calls dominant, legal orders so that past and present are bridged. The underlying idea is to bind the storytelling around narratives of rivers, rifles, rice, and religion.

Chapter 2 is based on the idea that “legal institutions develop in conjunction with the capacity of rulers to appropriate wealth and acquire revenue and the demands of needs they confront for the allocation of the material resources they control” (37). This chapter also explains the storytelling narratives of the book. First, basic geographical conditions, such as climate, terrain, and, first and foremost, rivers, are pre-eminently determinative: “Law and ‘civilization’ emerged first along rivers” (40). The Tigris, the Indus and the Ganges, the Nile, the Yellow, and the Yangzi rivers are mentioned.

Control of rivers and their wealth-producing basins has been, argues Haley, tremendously important for the development of legal and political systems. A second key factor is warfare (i.e., rifles) because warfare and the accompanying need for better weaponry and human resources had continuing political and legal consequences. Third, rice production also had major consequences for the foundations of law, as it requires interdependency and cooperative behavior. Fourth, religion is key because of its storytelling narrative, as enduring political and legal orders reflect the commonly shared beliefs and values of those who are governed.

Chapter 3 then deals with the specific foundation of public law and private ordering in China by discussing rivers, rifles, and rice. The patterns of agricultural production caused shared habits of interdependence and cooperation influencing the modes of social organization in the whole region connected by rivers. Haley explains the tension between so-called Confucians and Legalists, showing that Legalist thinking had an important role in China to the effect that morality and law were seen as completely different domains. Here law remained a secondary instrument of social control enhancing the birth of a centralized form of governance without a religious base. On the whole, for Haley, China exemplifies public law ordering.

Chapter 4 then explains in a detailed manner the foundations and history of private law and private ordering in Japan by emphasizing the role of rice and warfare. In Japan's case, the lack of rivers was a key factor that prevented the birth of the centralized rule that had taken place in China. Rice production was the major source of sustenance and wealth, but producers were denied access to governmental power. This led eventually to warrior rule and development of adjudication. In the absence of imperial power, adjudication of private claims developed into a routine function of governance. Even during the Shogunate, the regulatory reach of central government remained modest. In short, Japan exemplifies private law ordering.

The book also includes chapters on law in Europe and in Hispanic America.
Posted by David Schorr at 10:58 PM