Climate science, history, and the law

Bill Kovarik recently posted at "Environmental history timeline" on a lawsuit against Exxon-Mobil, raising some interesting questions. Some highlights:


The lawsuit is based in part on an investigation by the Center for International Environmental Law which accused Exxon-Mobil Oil Corp. of working to dismiss climate change science and political action despite having had a scientific understanding of climate change “as early as” three or four decades ago, (or sometimes 1977, or 1968). The research grew into an “Exxon Knew” campaign. It was greeted with enthusiasm by environmentalists like Al Gore and Bill McKibben and with skepticism by Independent Petroleum Association of America and by Exxon-Mobil itself.

The key issue seems to be when Exxon knew climate change involved C02 from fossil fuels. Many of the Exxon Knew stories start along these lines: “In the 1960s, the American Petroleum Institute (and / or Exxon) made a troubling discovery.”

From an historical standpoint, the question ought to involve the broader context of scientific research. If API and Exxon researchers knew about climate change, what about the rest of the engineering and scientific community? 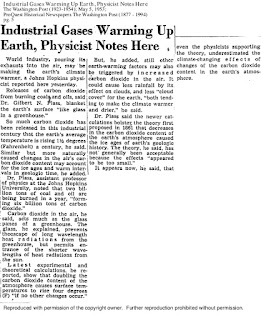 The fact is that the topic was a constant source of concern and research across the related scientific communities for a century and a half. Scientists concerned with climatology and glaciology and many associated geophysical sciences have studied climate change for generations.

As seen here, the Washington Post carried an article May 4, 1953 on a Gilbert Plass paper at American Geophysical Union, quoting him specifically pointing to fossil fuel use as increasing climate warming.  Plass and other climatologists regularly published on these and related topics, with much of that generation’s research converged in the International Geophysical Year (1957-58).

Kovarik goes on to discuss many other scientists and others who warned about greenhouse gas induced climate change beginning in 1856.


So, clearly, Exxon knew, but so did everyone else.

In confining the discussion to Exxon’s own knowledge and actions, for example in a series of Inside Climate News articles, we have a legal strategy rather than an appreciation for the history of science. When we say “Exxon knew” as early as the 1970s or 80s, we ignore the long trail of scientific discovery beforehand, and we leave the field open to highly selective interpretations of trends.