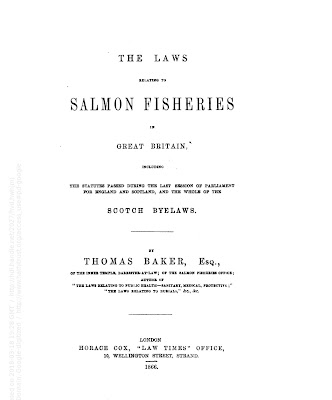 This week's addition to the digital library of historical environmental law is Thomas Baker's The Laws Relating to Salmon Fisheries in Great Britain, published in London by Horace Cox in 1866. Baker, the title page tells us, was a barrister of the Inner Temple and the Salmon Fisheries Office, and also the author of works on public health law. In the preface to the work Baker explained the need for a work on salmon law:


The Salmon Fisheries of this country have, by long neglect, become greatly injured. Poachers, thoughtless anglers, ignorant fishermen, and, above all, the abuses arising from the use of fixed engines, and the loose manner in which the close seasons were fixed, threatened the total destruction of the fish. To remedy this state of things, several statutes have at length been passed, applicable to Great Britain.

The first pages of the work proper have this Python-esque clarification:

On a more serious note, the work shows that the feasibility principle (or best available technology) was part of Victorian fisheries law:


To protect the fish from poisonous substances it is provided that every person who permits to flow, or permits to be put into any waters containing salmon, or tributaries thereof, any liquid or solid matter, as to cause the waters to poison or kill fish, will incur upon the first conviction a penalty not exceeding five pounds....  But no person will be subject to these penalties for any act done in the exercise of any right, if he prove that he has used the best practicable means, within a reasonable cost, to render harmless the matter so permitted to flow or to be put into waters.... It is obvious that, for preventing the destruction of fish, a mining company realising an immense income might reasonably be called upon to expend a much larger sum than an individual proprietor of a small paper-mill...