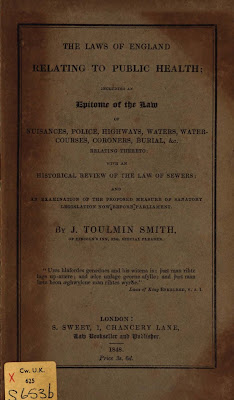 This weeks addition to the digital library of historical environmental law is Joshua Toulmin Smith's The Laws of England Relating to Public Health, published in London by S. Sweet in 1848. The full title continues: Including an Epitome of the Law of Nuisances, Police, Highways, Waters, Water Courses, Coroners, Burial, &c. Relating Thereto; with an Historical Review of the Law of Sewersl and an Examination of the Proposed Measure of Sanatory* Legislation Now Before Parliament. As you can tell from the title, "public health" in the Victorian era included much of what we would today label "environmental law".

You wouldn't know it from the title, but Toulmin Smith was a major critic of England's mid-nineteenth century public health legislation, as Noga Morag-Levine has explained. A sort of "free-market environmentalist" of his time, he argued that the new centralized, administrative regulatory mechanisms enacted under Edwin Chadwick's reformist program--what Toulmin Smith called "empirical legislation"--were inconsistent with the English constitution, which (he argued) required regulation through the common law. (Compare Philip Hamburger's recent arguments in this vein.) So Toulmin Smith's work was more of an attack on contemporary environmental and health regulation than a treatise summarizing the law, as he explained in his Introduction:


The object of these pages is very simple. It is to show that the care, by law, for the public health, and for removing causes injurious to public health, is no new thing : that the law of England has ever had a most careful regard for all that concerns the public health: that the principles of the common law in reference to the matter are clear and decisive, and may be taken as models of what law should truly be in its regard for the welfare of the people. It is, further, to show that though, as manners and customs change with passing time, the machinery for carrying out certain principles of law into practice may be modified, those principles, based as they always are on national peculiarities, ought never to be neglected for the sake of introducing novel or speculative doctrines. Thus, it being a principle of the common law that any noxious accumulation is a nuisance which ought to be abated, it may be of little importance whether it be abated, in one age, by the bailiff of the court leet, or, in another, by the inspector of police; but it is of very great importance that new and theoretical remedies, interfering with numerous private rights and honest prejudices, should not be introduced and made compulsory.

The Common Law of England has been, in all ages, the great bulwark of the liberties of Englishmen. It is just in proportion as the principles of that common law have been neglected or superseded that those liberties have been endangered. And the people are bound to take care that, in the anxiety for sanatory improvement, no fresh invasion of those liberties do take place. For this purpose it is necessary that the principles of the common law be well known to the people themselves ;—and it is desired to be understood that these pages are addressed, for that purpose, to the general reader ; and that it has, therefore, been endeavoured to divest them of technical treatment.

It seems that Toulmin Smith's anti-regulatory agenda also made him something of a cholera skeptic:

There are always some men, making loud professions of public good, who manifest their sincerity by the determination to carry their own particular plans, or nothing. To such these pages are not addressed. It is only such men who make use of the cholera as a bugbear to frighten the people of England into assent to any sanatory measure that may be proposed. It might be well to remind those who resort to this man oeuvre that anything which has been obtained by " fraud and duress" (which any measure passed through dread of the cholera will be) is a nudum pactum, in the eye of the common law of England.

It has been clearly established that cholera is not a disease which, in this country, increases, except in some exceptional places and to a trifling extent, the mortality of a broad district. It is not a disease so much added to the ordinary active causes of mortality as it is one which takes the place of, altogether for the time supplanting, diseases which are every day committing their ravages among us. The extra mortality which has, during the present inter, occurred in the metropolis, and has at various other times done the same, from the prevalence of influenza and various forms of febrile disease, immensely exceeds the extra mortality which the cholera occasioned. These are facts which it is of no little importance to the public should be generally known and thoroughly understood.

* (The author explained his use of the word "sanatory":


As a new mode of spelling this word has lately been adopted, a remark on the subject is proper. The first Commission, and the Health of Towns Association in their report, spell it as above. The compounds from "sano" are generally used in English in reference to the mind. Any form of the word is bad therefore, as applied physically, in our language. But "sanity" is always applied to the mind (it was also thus employed by Cicero), while "a sanative" is sometimes used for a physical remedy, (so "sanutio" by Cicero). Hence it is clear that "sanatory" is the only admissible form of the word, if it be used at all; and against that use it would now be vain to protest.)