The constitutional background of the Migratory Bird Treaty 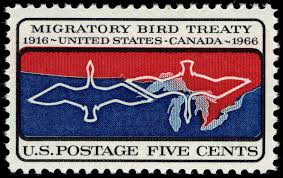 Ecology Law Quarterly recently published a student note by Emma Hamilton, "A Relic of the Past or the Future of Environmental Criminal Law? An Argument for a Broad Interpretation of Liability under the Migratory Bird Treaty Act". The note is mostly normative, but it has an interesting introductory section (apparently relying heavily on Kurk Dorsey's 1998 The Dawn of Conservation Diplomacy). Hamilton explains (notes omitted) that:


early congressional attempts to regulate bird hunting in the United States were driven by broad concerns about conserving and stabilizing bird populations as an important shared resource. After years of advocacy and lobbying, conservationists, scientists, and recreational hunters who wanted to achieve sustainable populations of game birds succeeded in passing the Weeks–McLean Migratory Bird Act in 1913. The Weeks–McLean Act criminalized the killing and transport of migratory birds across state lines within the United States but was declared unconstitutional by two federal district courts for violating the Commerce Clause. Recognizing these constitutional concerns, conservationists pushed ahead to negotiate the international Migratory Bird Treaty with Canada. The constitutional question was declared moot following the ratification of the Treaty, because the Treaty and the subsequent MBTA replaced the Weeks–McClean Act as the federal statutory scheme for protecting migratory birds.

Echoing the goals of the Weeks–McLean Act, the two nations negotiated the Treaty to curb the indiscriminate slaughter of migratory birds and conserve their populations for the future. The Treaty was formalized on August 16, 1916 and ratified by both nations later that year. The Treaty emphasized the particular dangers birds face when their migratory patterns and ability to nest are disrupted. It further recognized that the migratory nature of birds created an additional difficulty in protecting them, as their constant movement across state and even international lines reduced the effectiveness of state game laws aimed at conserving bird populations. As one congressman opined on the House floor during debate over the MBTA:

"Everyone will admit the necessity of preserving these . . . birds. How may they be conserved? . . . No single State may do so. Perhaps it is not too broad a statement to say that even the United States could not do so . . . and it has become evident that if we are to have any effective law which shall preserve these valuable birds that serve such a useful and necessary purpose it must be through the joint action of both countries."

Following the 1916 Treaty’s ratification, Congress passed the MBTA in 1918 to implement the Treaty provisions protecting and conserving native migratory birds in the United States. During debate, some members of Congress objected on the grounds that the Treaty had been pursued as a way to simply make the Weeks–McLean Act—which many considered unconstitutional—constitutional by avenue of executive treaty power. While this concern certainly prompted the negotiation of the Treaty and ultimately led to the MBTA, the Treaty should be viewed in retrospect as an early recognition of purely domestic U.S. law’s limits to addressing the international challenge of protecting birds whose migration patterns cross state, national, and even continental borders.

Later conventions with Mexico, Japan, and the Soviet Union also shaped the protections in the current statute, and include language suggesting additional justifications and methods for conserving migratory birds. While the treaties with Canada and Mexico included economic justifications for bird conservation, reminiscent of the reasoning advanced in the House in 1918, later treaties with Japan and Russia signaled the United States’ intent to partner with these countries to conserve migratory birds for “noneconomic aesthetic, scientific, and cultural purposes.” The Japanese and Russian conventions also included specific language explicitly emphasizing the importance of protecting critical migratory bird habitat. Thus, while the original treaty and domestic legislation that followed may have focused on restricting hunting to achieve their purpose, a strong conservation ethic drove the passage of the MBTA and its subsequent amendments, and thus should drive its enforcement and interpretation in the courts.