Digital Library V: A History of the Foreshore and the Law Relating Thereto (1888) 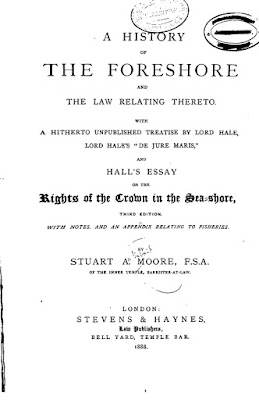 In the common-law world, historical and legal argument are frequently intertwined, a phenomenon reflected in the title of this week's addition to the digital library of historical environmental law, Stuart A. Moore's A History of the Foreshore and the Law Relating Thereto, published in London by Stevens & Haynes in 1888 (available on the Internet Archive and in Gale's The Making of Modern Law).

Moore's work was part of a wave of antiquarian interest in early writings on property rights in the seashore (today this topic would be labeled "public trust doctrine") that seems to have been motivated largely by legal and economic issues at stake during Britain's industrial revolution. So in addition to his treatment of a legal manuscript by the Elizabethan-era mathematician Thomas Digges and other early sources, Moore reproduced in his work "A New Treatise by Sir Matthew Hale, from a MS. in his Handwriting", which Moore believed to be an early version of the influential De Jure Maris and other works by Hale published by Francis Hargrave in the late eighteenth century. And, as Moore explained in his introduction, the whole work was born out of a project to issue a new edition of Robert Gream Hall's Essay on the Rights of the Crown and the Privileges of the Subject in the Sea Shores of the Realm, first published in 1830:


The sole purpose of the present treatise is to throw light upon the difficult questions which so often arise between the Crown and the subject with regard to the title to the foreshores of this kingdom, I was requested by the publishers to prepare a new edition of Mr. Hall's treatise upon the Sea-shore, which was first published in 1830, and most ably re-edited by Mr. Loveland in 1875. In preparing the work, however, I was so much surprised at the unfairness of the arguments put forth by Mr. Hall, arising, without doubt, from an imperfect knowledge of the true facts relating to the subject (which it is but just to say were not accessible at that time), and at the unquestioned bias in favour of the Crown which is apparent throughout his work, that I induced the publishers to allow me to preface the edition with a brief treatise in which I proposed to controvert some of Mr. Hall's arguments. To do this I had recourse to a large quantity of material relating to foreshores, fisheries, and other manorial rights collected by me during many years from the Public Records and from reported cases. I speedily, however, found that, instead of writing a brief treatise, it would be necessary to set forth these records and cases chronologically, in order that the reader might be fully possessed of the material upon which I have based my arguments. Thus I have been led into writing this History of the Foreshore rather than a brief argumentative treatise. This has been done, I hope in an impartial spirit, with a view of setting forth the true history of the commencement and growth of the theory of the prima facie title of the Crown to the foreshore, from the time of its invention by Mr. Thomas Digges in the reign of Elizabeth. Though fully conscious that the whole of the true facts are by no means as yet ascertained, and that many cases which are collateral to the subject with regard to fisheries and other maritime rights have for want of space been omitted from this volume, I trust that sufficient has been done to shew that the theory of the prima facie title of the Crown is a mere theory of abstract law, a theory of "law taken for granted," based upon an untrue assumption of a state of facts which might possibly have existed, but which is really not in accordance with the true state of facts relating to the matter, so far as they can at the present day be ascertained. I have endeavoured to shew, and I venture to think I have shewn, that the true presumption with regard to the ownership of the foreshore is, and should be, as it clearly was before the time of Queen Elizabeth in England, and down to 1849 in Scotland, that prima facie the manors and estates of the subjects extend to the low-water mark and include the foreshore. This, of course, is precisely the reverse of the presumption which is asked for by the theory which is now vouched as undoubted law. I distinctly wish it to be understood that I do not for one moment suggest that the theory is a theory bad in law, or that it should be overthrown or displaced, and for this reason — that, as we are unable, from the loss of ancient records of the realm, to prove absolutely that the Crown has parted with the whole of the foreshore, we cannot say that no portion of it remains in the Crown as part of the waste dominions of the realm. Of course, if we could prove that absolutely, then there would an end of the theory and the presumption arising from it ; but it would have to be proved as a matter of fact, and that cannot be done. What I do contend for — and I think, if this volume be studied, it will be found that I have good grounds for so contending — is, that the theory of the prima facie title is not to be taken, as it has been taken for many years, as a theory of almost irresistible inference in favour of the Crown, for I have proved from records that the true facts shew that the Crown has to a very large extent granted away the foreshore, and that very little, if any, of it really and in fact remains vested in the Crown."

You may want to purchase a copy of Moore's treatise; as noted in an earlier post, the Morning Post raved that "The book should certainly find a place in the library of the lord of every riparian manor."
Posted by David Schorr at 11:49 PM