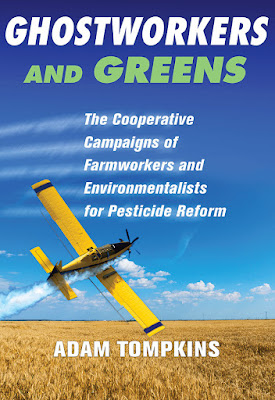 October's Environmental History had a review by Erik Loomis of Adam Tompkins's Ghostworkers and Greens: The Cooperative Campaigns of Farmworkers and Environmentalists for Pesticide Reform (Cornell UP, 2016). Tompkins's book seems to add to a growing body of work on the labor movement as a force behind important developments in environmental regulation. From the review:


Because legislation excluded agricultural workers from the New Deal’s labor protections, farmworkers lacked political power, forcing them to seek alliances with middle-class organizations to win their battles and protect themselves from the chemicals used by growers. Environmental organizations needed farmworkers to counter accusations of being anti-worker and to ground their claims in the lived experiences of the most affected populations. The UFW’s 1970 grape contract included provisions that banned growers from using chlorinated hydrocarbons such as DDT and dieldrin. This laid critical groundwork for environmental groups’ final push for an EPA ban on DDT in 1972. As the 1970s went on, the Sierra Club and other leading environmental organizations developed a growing awareness of social justice and believed they had a natural alliance with farmworkers. This can be overstated, as the 1990 letter sent by the Southwest Organizing Project to major environmental organizing accusing them of “racist and exclusionary practices” demonstrates. Perhaps Tompkins could have evaluated these accusations in the context of his work on environmentalist work with farmworkers, but he does not.

Three later chapters on state-level activism in Arizona, California, and Florida are where Tompkins digs deep into the details of coalition building. In Arizona, years went by with suburban white environmentalists and rural Latino farmworkers missing each other as they each went through waves of activism over pesticides. Finally, the two groups built a meaningful alliance after agricultural pesticide drift threatened expanding suburbs in the mid-1980s, leading to the Arizona Environmental Quality Act in 1986. In California, both groups fought Governor George Deukmejian’s deregulation efforts in the 1980s, but often with different priorities that hampered close cooperation, even as good relationships between them were cultivated and maintained. Finally, Tompkins closes the book with an examination of how farmworkers and environmentalists worked together in Florida and California against methyl bromide after growers’ associations launched a battle to resist the limitations on its use the United States agreed to in the Montreal Protocol in 1987 to fight ozone depletion. Greens and workers could not completely counter the growers’ power, but their work did raise public awareness about the chemical and led to growers seeking alternatives, even as it is still used today.

Building meaningful alliances between different organizations is hard work, requiring constant attention to shifting priorities that is difficult to maintain over a long period. These movements and alliances have been critical for both workers and environmentalists but are also fraught with organizational difficulties, the shifting internal priorities of various organizations involved, and the racial and class politics of both movements. Tompkins has a good sense of the day-to-day alliance building these campaigns require, and he avoids both overestimating their impact and romanticizing their possibilities.