January's Environmental History has a review by Leif Fredrickson of Michael Mix's Leaded: The Poisoning of Idaho’s Silver Valley (OSU Press, 2016). From the review: 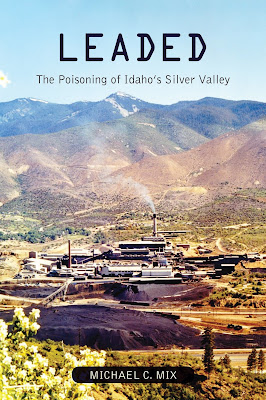 The poisonous history of the Bunker Hill Company should be as well known to environmental historians as the Battle of Bunker Hill is to historians of the American Revolution. Located in the Silver Valley in northern Idaho, Bunker Hill mining and smelting operations polluted the surrounding area and poisoned residents and workers with lead for a century. In the 1970s, Bunker Hill’s operations wrought “the worst community lead exposure problem in the United States,” according to the Centers for Disease Control and Prevention. The silver lining to the Silver Valley disaster was that it fueled new and stronger national regulations for lead pollution.

In Leaded, Mix seeks to unearth the “root causes” of mining and smelter pollution in the Silver Valley. He argues that pollution went unabated for most of the twentieth century because the government sought to empower Bunker Hill in the pursuit of economic development and western settlement. Countervailing forces were either too weak or too dependent on the company to resist the massive pollution externalities the company foisted on others. Workers and Silver Valley residents often spurned criticism of the company—“Uncle Bunker” as locals called it—for fear of losing the area’s key employer. Similarly, state politicians feared losing a thriving business and a source of taxes. Bunker Hill’s economic and political power produce favorable legislation and the company benefited from judges and regulators who sided with the industry over labor and those harmed by pollution. Bunker Hill’s power was also rooted in knowledge. The state government lacked the resources to know much of what Bunker Hill knew, or could have known, about the poisoning of workers and the community.

Until the 1970s, the federal government did nothing to change this situation. Federal courts doled out, at best, piddling compensation for land and livestock poisoned by mines and smelters. Federal environmental laws were weak until President Richard Nixon created the Environmental Protection Agency (EPA) and Congress passed legislation that could force states to meet air and water pollution standards. Meanwhile, in 1973, a fire destroyed part of Bunker Hill’s already outdated pollution control system. But with lead prices soaring, the company chose to continue operating its smelter anyway. The resulting widespread poisoning of children in the community, which came to light over the 1970s, catalyzed the EPA’s first air lead standard, promulgated in 1977, and provided evidence for a relatively low acceptable lead level. According to Mix, the air lead standard, along with more stringent occupational health standards, “signified an end for most western lead smelters,” since they could not profitably meet the new technology requirements. Bunker Hill shut down in 1981.