The future history of the Paris Agreement

A recent discussion on an email list led Michael Gerrard to raise the following idea:


For years to come people will be puzzling about the origins and meaning of many words and phrases in the Paris Agreement and Paris Decision. The large numbers of people who participated in the negotiations are all carrying recollections in their heads and their laptops about how certain language came to be.  Wouldn't it be useful, while memories are still fresh and files are not yet erased, if we had a way to capture and organize this? Would it make sense to set up some kind of Wiki system where people could post as comment bubbles, or footnotes, or whatever, their recollections about the negotiations around parts of the agreement?  Each comment would need to be accompanied by the name of the commenter (because anonymous commenting can lead to all sorts of mischief) and ideally by some explanation of how the commenter knows what he or she is saying (e.g. was present in such and such a negotiating session), so that later readers can judge the reliability of the information. 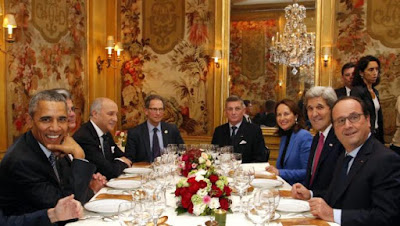 It seems to me that this shortly-after-the-fact legislative history of the Paris documents would be extremely useful to lawyers, officials and scholars, and that it is technologically possible (though I don't have the technological prowess myself). Negotiators could be invited to enter their memories on-line themselves. This could also be a project for large numbers of students; negotiators could be interviewed by students, who would go through the documents with them, record the recollections, and enter them as appropriate. Thousands of people participated in the negotiations, but interviews could be divided up and quite a few could be conducted this way. Additionally, several law schools sent to Paris groups of students who took extensive notes on the sessions they observed, so some of this information is already available but it would all need to be organized.

What do you think?
Posted by David Schorr at 5:08 PM