Legal history and the takeover of the Malheur Wildlife Refuge 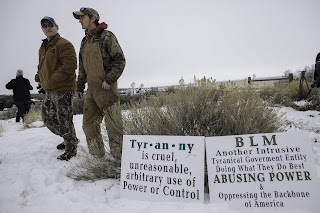 Three weeks ago antigovernment gunmen took over Malheur Wildlife Refuge in Oregon, USA, and they have been in a standoff with law enforcement officials since then. The gunmen (from out of state) are demanding that the land be "returned" to the local county. Some background is provided by Alan Feuer in the New York Times, who explains that the gunmen are echoing the claims of the "Wise Use movement":


Wise Use answers the question of who should own the West by granting moral primacy to natural resource companies and to logging and ranching families....

Though composed of many activists and scores of organizations, Wise Use found its voice in the late 1980s when a timber industry adviser named Ron Arnold published “The Wise Use Agenda.” The manifesto offered an expansive plan to gut environmental regulation, increase private ownership of public land and compel the federal government to open its holdings to mining, oil and logging companies and to the unrestricted use of off-road vehicles.

Mr. Arnold adopted the phrase “wise use” from Gifford Pinchot, the first head of the United States Forest Service (who said that “conservation is the wise use of resources”). In 1988 he held a conference, bringing together the likes of Exxon and the National Cattlemen’s Association, with the goal of seeding the West with grass-roots groups that could wrest control of federal land and give a local flavor to his Reaganite aims.

“Arnold sent organizers into distressed rural communities to set up front groups with environmentally friendly sounding names that whipped up hostility against the government,” said Tarso Ramos, the executive director of Political Research Associates, a research group that studies right-wing movements. What resulted, Mr. Ramos said, was a “coalition of natural-resource companies, property developers and conservative activists working with a network of community organizations.”

This coalition achieved success in pushing its agenda. By the early 1990s, politicians friendly to the Wise Use cause had introduced or passed legislation in nearly 30 states giving local governments and citizens expanded powers to lay claim to federal land. Among those politicians was Representative Helen Chenoweth-Hage, an Idaho Republican, who became notorious for mocking the Endangered Species Act by holding what she called “endangered salmon bakes.” There was also Gale A. Norton, the interior secretary under President George W. Bush, who once worked as a lawyer for the Mountain States Legal Foundation, which has billed itself as “the litigation arm of Wise Use.”


At FiveThirtyEight, Leah Libresco points out something that natural resource scholars and policy wonks have known about — and complained about — for a long time, perhaps decades, namely: these supposedly tough, flinty, independent-minded ranchers are robbing the taxpayers blind, literally feeding off of the public trough. But citing a study from the Center for Biological Diversity, Libresco article gets more specific: the Bureau of Land Management charges ranchers 93% less than the market rate for grazing.

It’s a rather typical trope for one element of supposed anti-government activism: get the government off our backs — but only after giving us free land, free resources, and free water (the last after the feds pay for massive irrigation projects). It’s hardly a surprise that Ammon Bundy, one of the ringleaders of the group (and son of lawbreaker Cliven Bundy) has benefitted from a federal loan guarantee program.

But from a legal standpoint, this paragraph in Libresco’s article stands out:

"The bureau’s fees are so much lower than the market price in part because its fees are set at a flat, national rate and can’t be adjusted to match demand in local markets. Plus, the bureau sets that national grazing price using a formula, rather than any kind of bidding system or market appraisals, as some other federal agencies with higher prices do. As a result, in 2014, grazing fees covered only 15 percent of the bureau’s costs to maintain grazing lands. The rest of the cost is made up in federal appropriations and covered by taxpayers."

The question for lawyers, of course, is why does the Bureau maintain these policies? It’s possible that the Taylor Grazing Act, the principal federal statute governing grazing, mandates it: this would make it akin to the infamous 1872 Mining Act, which allows companies to strip public lands of valuable minerals without paying a dime in royalties to the public or even clean up the mess they make.

But, like the song says, it ain’t necessarily so...: This could be a classic iron triangle, with the Bureau subsidizing the ranchers, the empowered ranchers pushing their Congressional representatives to support the Bureau in its efforts, leading the Bureau to support the ranchers even more. It could be what James Q. Wilson called “client politics,” where the benefits of a regulation are concentrated but its costs are dispersed: those paying the costs each only pay a little bit and those who benefit get a lot, so why should the agency take on the beneficiaries. It could be a matter of personnel: maybe the sorts of people who work at BLM are sympathetic to ranchers. Or it could just be inertia....