Yesterday's edition of This Day in Water History notes the anniversary of a historic interstate lawsuit over water pollution, Missouri v Illinois (1906). See my own take after the jump.


January 17, 1900: Fifteen days after Chicago opened the Sanitary and Ship Canal and reversed the course of the Chicago River to discharge sewage into the Mississippi River, Missouri sued Illinois, “…praying for an injunction against the defendants from draining into Mississippi River the sewage and drainage of said sanitary district by way of the Chicago drainage canal and the channels of Desplaines and Illinois river.” 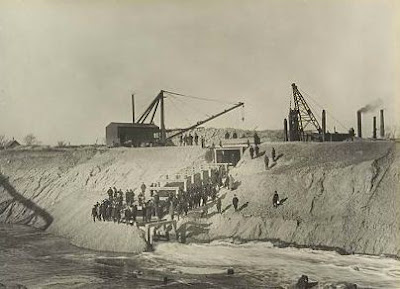 The Bill of Complaint alleged in part:

That the amount of such undefecated [huh?] sewage matter would be about 1,500 tons daily, and that it will poison the waters of the Mississippi and render them unfit for domestic use, amounting to a direct and continuing nuisance that will endanger the health and lives and irreparably injure the business interests of inhabitants of the complainant…

That the water of the canal had destroyed the value of the water of the Mississippi for drinking and domestic purposes, and had caused much sickness to persons living along the banks of said river in the State of Missouri.”

The opinion in the case was written by Supreme Court Justice, Oliver Wendell Holmes and read in part:

“The data upon which an increase in the deaths from typhoid fever in St. Louis is alleged are disputed. The elimination of other causes is denied. The experts differ as to the time and distance within which a stream would purify itself. No case of an epidemic caused by infection at so remote a source is brought forward and the cases which are produced are controverted. The plaintiff obviously must be cautious upon this point, for if this suit should succeed many others would follow, and it not improbably would find itself a defendant to a bill by one or more of the States lower down upon the Mississippi. The distance which the sewage has to travel (357 miles) is not open to debate, but the time of transit to he inferred from experiments with floats is estimated at varying from eight to eighteen and a half days, with forty-eight hours more from intake to distribution, and when corrected by observations of bacteria is greatly prolonged by the defendants. The experiments of the defendants’ experts lead them to the opinion that a typhoid bacillus could not survive the journey, while those on the other side maintain that it might live and keep its power for twenty-five days or more, and arrive at St. Louis. Upon the question at issue, whether the new discharge from Chicago hurts St. Louis, there is a categorical contradiction between the experts on the two sides.”

Commentary: In effect, Justice Holmes ruled in favor of Chicago. The experts for St. Louis had failed to prove their case.

Reference: Leighton, Marshall O. 1907. “Pollution of Illinois and Mississippi Rivers by Chicago Sewage: A Digest of the Testimony Taken in the Case of the State of Missouri v. the State of Illinois and the Sanitary District of Chicago.” U.S. Geological Survey, Water Supply and Irrigation Paper No. 194, Series L, Quality of Water, 20, Department of the Interior, Washington, D.C.: U.S. Government Printing Office.

I think Justice Holmes's decision is noteworthy in three respects:

"As to the principle to be laid down the caution necessary is manifest. It is a question of the first magnitude whether the destiny of the great rivers is to be the sewers of the cities along their banks or to be protected against everything which threatens their purity.... If we are to judge by what the plaintiff itself permits, the discharge of sewage into the Mississippi by cities and towns is to be expected. We believe that the practice of discharging into the river is general along its banks, except where the levees of Louisiana have led to a different course.... Where, as here, the plaintiff has sovereign powers and deliberately permits discharges similar to those of which it complains, it not only offers a standard to which the defendant has the right to appeal, but, as some of those discharges are above the intake of St. Louis, it warrants the defendant in demanding the strictest proof that the plaintiff's own conduct does not produce the result, or at least so conduce to it that courts should not be curious to apportion the blame."

For more on reciprocity as a principle of distributive justice in tort law see George Fletcher's 1972 "Fairness and Utility in Tort Theory".
Posted by David Schorr at 6:00 AM