Prior appropriation: A reassessment

Lawrence MacDonnell has posted "Prior Appropriation: A Reassessment". (The doctrine is a central aspect of water law in the western United States, according to which water is allocated to users on a "first in time" basis--for more, see here.) The short abstract explains that the paper "provides an overview of the literature critiquing the Prior Appropriation Doctrine, examines the historical evolution of the doctrine, and offers recommendations for modernizing its major concepts." The introduction explains (footnotes omitted):


Thoughtful observers have declared the law of prior appropriation obsolete, no longer relevant, or even dead. On the other hand, others have declared it the best-suited law yet devised to govern human uses of water, especially in water-limited places. Many writers have criticized at least some aspects of the law of prior appropriation. As further explored below, the criticisms take many forms. Far less has been written about the virtues of prior appropriation despite the tact that principles originated in the mining districts of nineteenth-century California ended up being adopted by seventeen western states.

Leaving aside that MacDonnell counts me upon the supporters of the doctrine (see p. 231), a characterization I'm not sure I agree with, the article is a good survey of much of the literature about the doctrine, pro and con. The following part, in particular, caught my eye (footnotes omitted again):


Elwood Mead was an early critic of the self-initiation form of prior appropriation. In his 1903 classic, Irrigation Institutions, he stated:

"The whole principle is wrong. It is wrong in principle as well as faulty in procedure. It assumes that the establishment of titles to the snows on the mountains and the rains falling on the public land and the water collected in fie lakes and rivers, on the use of which the development of the state in a great measure depends, is a private matter. It ignores public interests in a resource upon which the enduring prosperity of the community must rest. It is like A suing B for control of properly which belongs to C. Many able attorneys hold that these decreed rights will in time be held invalid because when they were established the public, the real owner of the property, did not have its day in court." 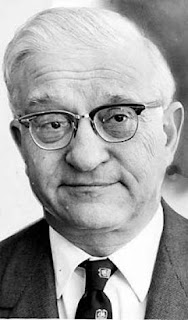 Colorado attorney Moses Lasky [right] pointed to the strong bias against administrative decision making in the United States during the era in which prior appropriation developed, the preference (and even necessity) for individual assertion of rights under frontier conditions, and the strong preference among common-law trained lawyers for determination of legal rights by courts in the context of a specific dispute. Because of the widespread adoption of permitting systems by 1928, Lasky concluded that "[t]oday prior-appropriation is the law nowhere in the West."

Mead's prediction didn't exactly come true, but doctrines such as reserved rights have indeed subordinated decreed private rights to public interest. I'm not sure Lasky's characterization of nineteenth-century America as being opposed to administrative decision-making stands the test of time, but his recognition that by the twentieth century the system had become an administrative one is right on.
Posted by David Schorr at 11:09 AM