It turns out that not all legal historians think environmental history is interesting. Today's Reviews in History has a review by Daniel Gosling of David Chan Smith's Sir Edward Coke and the Reformation of the Laws: Religion, Politics and Jurisprudence, 1578–1616 (Cambridge University Press, 2014). 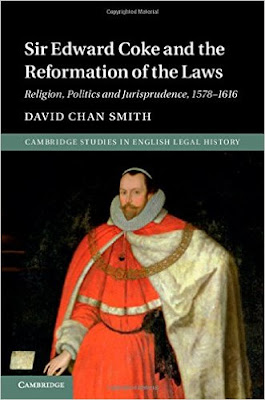 Here's what Gosling has to say about one of the chapters:


Chapter three looks in more detail at the corruption of the law in the early 17th century, and the complaints of those that were expected to use it. The text does this by examining the case-study of The Case of the Isle of Ely (1609), which saw Coke attempt to negotiate the proposed draining of the Fens, the low-land area of marsh and bog in the east of England. This was such a thorny issue because in order to drain the Fens taxes would have to be raised in the surrounding areas, and parts of the Fens would have to be enclosed to incentivise investors. Although this case-study demonstrated how contentious the common law could be amongst the wider population, and how Coke attempted to solve the problems, this chapter more than any of the others feels like an unnecessary digression from the wider argument, with too much time spent looking at the law in the Fens rather than the more pressing topic of common law reform that the rest of the book had set about to describe.

Some might have a different opinion. I would actually like to see a full-length study of the law of drainage; from what I remember from Catherine Drinker Bowen's book on Coke, commissions of sewers were a fertile source of law.
Posted by David Schorr at 10:03 PM