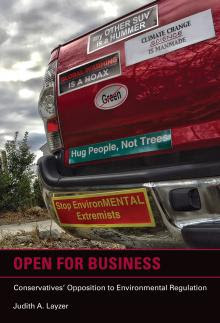 Conservative anti-environmentalism is an intriguing historical topic with great relevance for the development of law. I wrote about it last year, and also noted a book review of Brian Allen Drake's Loving Nature, Fearing the State: Environmentalism and Antigovernment Politics before Reagan. Now Linda Bui has a review in Enterprise and Society of Judith Layzer's Open for Business: Conservatives’ Opposition to Environmental Regulation (MIT Press, 2012). Bui writes (among other things):


Layzer argues that contemporary conservative ideas have had an important and mitigating effect on environmental policy—one that is easily underestimated. In part, this can be explained by the conservative movement’s effectiveness at shaping both how and what policy questions come to the table, and not just how they affect policies once they are in place. The author concludes that the consequences of both the direct and indirect (“low profile”) attacks against environmental regulation by conservatives have led to significant delays in the adoption of regulatory measures, the rollback of existing regulations, and a discrediting of the environmental narrative.

The evolution of the tools used by conservatives to try to attack the environmental movement is strongly correlated to changes in the understanding of the economics of regulation and the theory of externalities.... What Layzer... point[s] out... is how cleverly the conservative movement was at playing the academic card. When the economics matched the conservatives’ own needs, they adopted them as their own, and when they did not, they pushed the story line of the minority intellectual elite trying to bully the silent majority. For example, the conservative argument that free markets can solve the problems of the environment if governments are not allowed to intervene simply does not hold water when externalities are present. However, that is not the story that the conservative movement spins. The conservatives’ story begins and ends with the efficiency of the free market. On the other hand, demanding cost–benefit analysis when adopting a new environmental rule is a brilliant strategy when one can attack all the uncertainty associated with both the cost and benefit estimates, guaranteeing a slowdown in rule adoption.