Following up on Sunday's post on disasters, here's more on the subject: Franz Mauelshagen recently posted "Natural Disasters and Legal Solutions in the History of State Power". Some excerpts:


Throughout the history of disasters, legal solutions of one sort or another have played a significant role in recovery and prevention, as well as in shaping politics and individual behavior. After the Great Fire of London, following an extreme summer drought in 1666, the city council passed new building laws preventing the use of timber and man-dating stone or brick construction.Wood chimneys were prohibited after fires in Boston in 1631 and in New York in 1648. A list of similar legal changes in response to disasters would be endless. Through building codes,urban fire disasters have left visible traces in cityscapes almost everywhere around the world. In fact, because the new norms impact planning and construction for generations, they continue to leave such traces long after the buildings erected in the wake of the disaster have disappeared.

Legal solutions operate at the intersection between government and the members of a political community by sanctioning certain types of individual behavior, either through coercion or incentives. In other words, legal solutions aim to achieve a degree of behavioral homogeneity and predictability that legislators consider desirable. The potential of natural hazards and disasters to trigger cultural transformations over the long term ismost obvious in environmentally vulnerable regions, such as dense urban agglomerations, coastal settlements, or agricultural economies in precarious climatic conditions.

So far, only a few historians have considered natural disasters as an element in the evolution of governance. The evidence that has been brought to light suggests that natural disasters probably deserve a place in the history of state power—along with war and state competition. Political response to the second Bubonic plague pandemic in Europe, beginning with the Black Death in 1348, evolved over several centuries and left permanent traces in legal and political systems. Robert C. Palmer diagnosed that, in medieval England, the Black Death transformed “the nature of English governance” towards centralization, a new under-standing of governmental authority,and an enlargement of the sphere of legal matters. Such feedbacks of legal regulations in the realm of governance also explain how hospitals, originally invented to interrupt the chain of infection by separating the healthy from the sick, went from temporary to permanent institutions. The same holds true for medical councils, whose members initially had been appointed only in times of high emergency. In the eighteenth century, however, they became permanent, which made them precursors of departments of health in modern nation states. 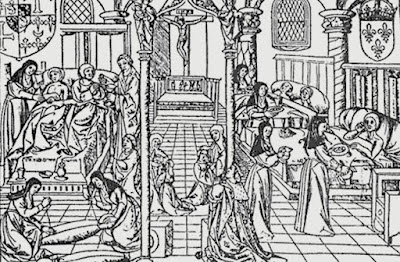