The environmental history of slavery is a topic that has gotten much attention recently. Thanks to Legal History Blog for pointing out a new angle on this: H-War recently posted a review by Eric Burke of Adam Wesley Dean's An Agrarian Republic: Farming, Antislavery Politics, and Nature Parks in the Civil War Era (UNC Press, 2015). Some excerpts from the review: 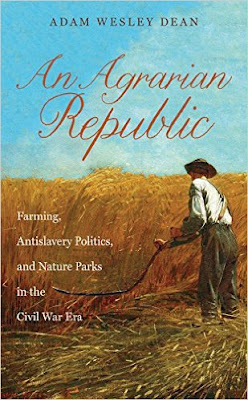 Historians have long attributed the ascendance of the Republican Party during the late 1850s to its broad appeal with Northern farmers, especially in the Midwest. The political ideology of the party was weighted heavily toward lauding the benefits of the proliferation of small-plot family farming throughout the nation. Indeed, as Eric Foner has pointed out, though Republicans are often connected in historical memory to their efforts to champion industrialization during the Gilded Age, antebellum and wartime Republicans emphatically insisted that America could (and should) remain "a society of family farms and small towns, while still experiencing the benefits of industrialization," and constructed their platform and policies accordingly.

In 1864, Congress... debated the fate of the Yosemite territory in California—a gem of natural beauty that many hoped "would 'civilize' the average person and improve his or her intellectual abilities" upon the mere sight of its splendor, and thus could best serve the public good preserved in its natural state (p. 7). Consistent with their near deification of the smallholding farmer however, radical Republicans disagreed. "The Constitution and the laws are for the protection of citizens and not for the creation of fancy pleasure grounds by Congress," one radical remarked, aptly summarizing the sentiments of many Republicans like George Julian of Indiana (p. 109). Radicals instead argued that the territory should be opened up for settlement by small farmers at once, thus fostering the spread of "freedom, union, and an improved society" (p. 126). The situation was complicated by the presence of "squatting" farmers already productively working the soil of the territory, forcing Republicans to decide whether or not to evict their beloved yeomen in order to preserve the territory's natural beauty for the enjoyment of the public at large—a plan supported by ardent Republican and landscape architect Frederick Law Olmsted. As Dean shows, Republicans fractured on these lines during the Yosemite debates of 1864, with the Olmsted project finally prevailing. But more important, Dean argues, the debates themselves offer a glimpse into the prevailing agrarian ideology of radical Republicans, suggesting that such "environmental controversies were not about preservation versus destruction," but rather were directly "connected to the main political currents of the time" (p. 8).

Also connected to these currents were Republican endeavors to reconstruct the South in the aftermath of victory and "civilize" Native Americans on western reservations. In his final chapter, Dean argues against the tendency of historians to find "inconsistency in [Republicans] promoting African American land rights in the South while curtailing Native American freedoms in the West." Republicans perceived no such inconsistency. "Both groups, they believed, would become small farmers and, in doing so, adopt white cultural values," Dean explains. "Since most northerners lived in rural communities and celebrated the environmental and political benefits of small farming, converting others to their lifestyle seemed natural" (p. 186). By emphasizing this factor, Dean ably supports his claim that "Northern policy makers did not want to industrialize the South and the West," but rather "intended to promote farming communities and strengthen the yeomanry that provided the foundation for republican government" (p. 136). Although perpetual violent resistance and the ever-decreasing tenability of small farming across the late nineteenth century gradually dismantled dreams of "civilizing" the Republic, Dean's approach highlights the continuity of Republican projects across the Civil War and Reconstruction era and "allows historians to make new connections between seemingly different topics" (p. 186).