I've been harping on the weather a lot lately, but it's at least a small comfort to know that it's probably hotter somewhere else. Like Death Valley. April's Environmental History had a review by Kevin Brown of Death Valley National Park: A History, by Hal K. Rothman and Char Miller (U. Nevada Press, 2013). Some excerpts: 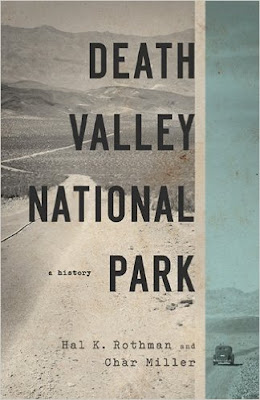 Based on Rothman’s administrative history of the park written under contract with NPS in the early 2000s and then revised posthumously by Miller, this concise and well-researched volume shows how the agency repeatedly struggled to reconcile its evolving mission and legal obligations with the past human uses of the desert and ongoing social and environmental changes beyond the park’s borders. While many of the issues that confronted NPS in Death Valley have been considered in the extensive literature on the national parks, Rothman and Miller’s focused study is a reminder that when considering a bureaucratic agency largely defined by particular landscapes, it is important to note how the peculiarities of place help to create variations in policy.

Conflicts over existing claims to land and water within the park form a crucial part of Rothman and Miller’s work. Native Americans had lived in and around Death Valley for thousands of years, seasonally migrating through the region to take advantage of resources at a variety of elevations. At the founding of the national monument, those Timbisha Shoshone remaining in the park were “caught in limbo” and denied control over lands on which their lives had depended but to which they did not hold legal title (p. 69). Until the 1990s, when the Timbisha finally gained some measure of control over tribal lands in the park, this tension was reflected through NPS (shamefully) ignoring or exacerbating conditions of substandard housing at a community built near park headquarters in the 1930s.

Rothman and Miller’s study also shows how the 1960s and 1970s reshaped the management of Death Valley’s natural and cultural resources. The suite of environmental laws passed in those decades collectively pushed NPS (sometimes reluctantly, sometimes willingly) to designate wilderness, establish protection plans for animals that had been in the park for a very long time (desert bighorn and pupfish), while also working to curtail those invasive species relatively new to the park (burros and tamarisk). NPS also belatedly began to take stock of its archeological sites and developed a plan for preserving historic structures. While some of these planning efforts have been successful, Rothman and Miller suggest that the growth and development of the Southwest has also brought new resource challenges to Death Valley, especially in the form of groundwater withdrawals, air pollution, and crime.