The American abortion battle and the environment

Over at Legal History Blog, Mary Ziegler has been blogging about her new book, After Roe
The Lost History of the Abortion Debate (Harvard UP, 2015). Earlier this week she posted on "Population Control, Immigration, and Environmentalism"; here's an excerpt: 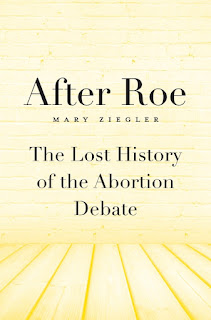 In After Roe, the population controllers’ story illuminates the changing relationship between the movements for legal abortion and women’s liberation. From the beginning, women played a crucial role in demanding legal access to abortion. Just the same, the early movement for abortion rights often shied away from women’s-rights arguments, and the relationship between the two movements was often rocky. At a time when women’s liberation remained controversial and women struggled for respect in the workplace, movement pragmatists believed that they would get results faster if they could convince voters and judges that legalizing abortion would have other desirable effects. Arguing that women had a right to abortion said nothing about how everyone else would benefit from legalization. By sometimes focusing on lower welfare costs, environmental benefits and reduced illegitimacy rates, movement members hoped to reach a larger audience.

All of that changed when the population-control movement found itself buried in scandal in the later 1970s. Sterilization abuse at home and abroad persuaded many observers that population policies were irrevocably racist and coercive. As population control became more controversial, feminists gained new influence in what would become the pro-choice movement. Population controllers also began staying away from the abortion issue, seeing it as another controversy that they could ill afford.

It seems that the implosion of population control had ramifications beyond the issues of abortion and family planning. In the 1970s, leading population organizations often advocated for abortion and family planning, environmental protection, and immigration limits. By contrast, organizations that lobby today for immigration limits, like NumbersUSA and the Federation for American Immigration Reform (FAIR), almost never discuss environmental issues. Conversely, groups like the Sierra Club consistently avoid arguments about the environmental damage some tie to overpopulation.

I imagine that the story of party positions on immigration and environmental issues is equally surprising and rich. In the 1970s, it was far from obvious that environmentalism would be primarily embraced by Democrats. If we understood how the parties established a position on environmental issues and immigration in the decades after Roe, we might discover some of the lost possibilities for advocacy on either issue.