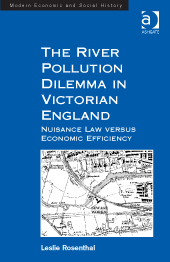 The river pollution dilemma emerged as Victorian England’s increasing urbanization and sanitary reforms led to the disposal of urban waste and effluvia into the rivers of the surrounding countryside. Since English nuisance law protected the rights of downstream riparian landowners from nuisance caused by those upstream, the enjoyment of lands and rivers by a few private individuals was brought into conflict with the sanitation and public health of urban inhabitants. As a Northampton commissioner framed the dilemma: “is it not better that one family should suffer a nuisance [from sewage pollution] than that half Northampton should be poisoned?” (p. 39). The polluting towns’ defense that their actions were in the public interest was not an arguable defense in law, and the Court of Chancery generally held the towns liable for the environmental pollution.

However, that is not where the story ends. In this well-researched book, Leslie Rosenthal examines ten legal conflicts over river pollution, and shows how judges balanced the formal upholding of the law with the management of the nuisance. While the polluters were held liable for causing the nuisance, in none of the case studies was a town’s sewer outlets physically stopped by the courts. Instead, the court took on a supervisory role on the process of abating the nuisance by ordering injunctions, but not actually enforcing them until a certain date, thus allowing the towns the time to adjust their sewers’ outflows. An important theme of the book is that the existing nuisance law was ill-equipped as a protector of the environment, as complainants could be paid compensation or sewage could be diverted, which solved the legal case but did not actually address the pollution itself. In addition, the technological options for treating the sewage were limited at the time. As a result, Rosenthal argues, the cases in which the court induced a town to reduce the nuisance of its pollution should be considered a success “worthy of celebration” (p. 231).

A recurring theme in the river pollution disputes discussed is the court’s delays in enforcing its own injunctions as the judges were aware of the effects that stopping the sewer outflows would have on the population. In the dispute between the Birmingham sewage authorities and downstream landowners over sewage pollution in the River Tame, which was the first of these disputes to reach Chancery, the court formally upheld riparian rights, but effectually allowed Birmingham to continue polluting the Tame while it tried to address the nuisance, a process that took almost half a century. The only recorded cases where sequestration writs—in which the court seized ownership over the administration in charge of the sewers—were actually enforced and delivered were in Leamington Spa and Tunbridge Wells, and even there they did not lead to the towns’ sewage being stopped but acted as the court’s ultimate inducement for local authorities to show they were undertaking sufficient action.

The case studies display several other means of ending the legal disputes. These included negotiating, settling by paying off the complainants, diverting the sewage so it would not cause nuisance to the original complainants, and seeking a parliamentary exemption that would override the common law rights of the riparian landowners, which was employed by Wolverhampton. While these strategies addressed the legal complaints and closed the nuisance case, they did not address the physical problem of sewage pollution.

Rosenthal draws on a wide range of official sources, including the legal cases and records created by the towns’ administrations, but also takes on the more challenging task of investigating the complainants, who were private individuals for whom less documentation is available. Dealing with such unequal archive materials, it is commendable that Rosenthal has managed to provide very balanced accounts of the case studies. The book acknowledges that the choice of cases has been guided by the availability of sufficient information representing the complaining side, and that this could lead to a potential bias in favor of the more eminent complainants.