A usable past for commoners

We just love histories of history. Reviews in History recently carried a review by Brodie Waddell of Andy Wood's The Memory of the People: Custom and Popular Senses of the Past in Early Modern England (Cambridge UP, 2013). Waddell writes: 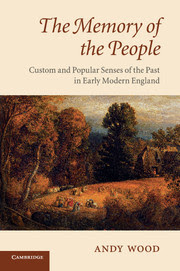 Much of the book revolves around common rights and agrarian custom. As Wood shows, a ‘usable past’ was absolutely central to the economic lives of the vast majority of the population who lived and worked on the land as tenants or smallholders. Their subsistence was often dependent upon precise – if occasionally selective – memories of customary rights to grazing, fuel and other resources. In 1570, for example, the tenants of Cockermouth were satisfied because ‘albeit their Fermeholds were small the Comons were great’ (p. 158). Yet, in most cases villagers only had access to such ‘Comons’ because they could prove that they had used them for ‘time out of mind’ and, according to Wood, their ability to deploy this ‘useable past’ changed substantially between the 14th and 19th centuries. The aftermath of the Black Death left the English peasantry in a strong position with landlords desperately needed tenants and labour. It was in this period, he argues, that the peasants won the indulgences that would soon, through the power of ‘social memory’, be transmuted into ‘customs’ and thus into rights or entitlements. In the early modern period, tenants defended these customs assiduously through increasingly sophisticated use of documentary evidence and the law courts. However, Wood also demonstrates how customs that favoured the tenantry were under attack. Lords sought to harness rents to inflation and seize exclusive control of common lands. In the wider culture, this manifested itself as a forceful discourse of ‘improvement’. Similarly, Wood suggests there was a hostility to custom amongst godly humanists. Thomas More, for example, who is often quoted as a defender of the commons against the lords’ man-eating sheep but who was typical of many humanists in criticizing those who justified a practice by citing its antiquity (p. 123). Worse still, in the 17th century, gentry attitudes were ‘hardening’ even further and there was an apparently ‘decisive shift’ against custom and against commoners in the central law courts (pp. 126, 160). The power of popular memory was being eroded. According to Wood’s chronology, it was in the late 18th century that the final break came. Enlightenment ideology and capitalist demands for labour discipline led to an ‘epochal shift’ towards a ‘new order’ in which custom had no authority (pp. 314, 350-2). However, even then the memory of the people was not extinguished. In the 19th century, as Wood acknowledges, common rights remained important for many working-class families and a strong sense of the past informed radical agrarian politics. The chronology presented in this book is thus careful and nuanced, even if the overarching narrative is one of struggle and loss.


One of great strengths of this book it is the clarity with which Wood addresses what one might call the ‘problems’ of early modern popular memory. Both Tawney and Thompson tended to romanticise ‘custom’ as inherently communalist and democratic. It would be impossible to miss the fact that Wood shares their broadly leftist political leaning and hostility to the landlord’s surveyor whose ‘commodifying gaze’ only ‘produced a narrow and impoverished vision of the landscape’ (pp. 190, 193). But, despite his empathy with the ‘commoners’, Wood discusses the limits of custom extensively. He describes, for example, how manor courts – the guardians of customary rights – sought ‘social tidying’ by excluding migrants and promoting definitions of ‘neighbourhood’ that had no place for the poor (p. 178). Likewise, although deponents in the central courts were rarely gentlemen, they were even more rarely the very poorest individuals such as sub-tenanting labourers or mobile vagrants. Even more importantly, as noted above, they were nearly always male: only about one in 20 deponents were women. As a result, Wood argues that ‘the memory of the people’ was often merely ‘the memory of man’ (p. 306). Not only did men provide the vast majority of deponents and dominate the institutions that preserved custom, their memories were also highly gendered, rarely including the words or deeds of women. Wood thus works hard to draw out the ways in which women practiced and protected local custom, including some specifically ‘gendered’ customs such as those associated with birth, dairying, market trading and inheritance. Hence, the reader is able to see how some women could draw on social memory to protect their interests whilst others suffered due to male-authored customs that, for instance, made a widow’s inherence [inheritance?] conditional upon her chastity. The exclusion of migrants, the very poor and women were never complete and often contested, but it was still an undeniable by-product of the ‘memory of man’ in many communities.

Plenty more in this interesting review.
Posted by David Schorr at 6:00 AM