Jotwell recently posted "A Legal Beagle's Voyage", Steve Gold's review of Nicholas A. Robinson, "Evolved Norms: A Canon for the Anthropocene", in Rule of Law for Nature (Christina Voigt ed., Cambridge UP, 2013). Robinson, Gold tells us, observes that "the study of how human law shapes the planet’s evolutionary future barely acknowledges the role of biological evolution in shaping human law."


In Evolved Norms, Robinson sets out to correct this by connecting the contemporary emergence of consensus environmental law to the evolutionary emergence of widespread behavior patterns favored by natural selection. Drawing on sources in both the biological and social sciences, Robinson argues that humans have evolved instinctive, “hard-wired” normative preferences for cooperation, biophilia, and resilience. These norms are reflected in design principles that have shaped existing environmental laws – and that should be relied on to structure the global environmental law we will need to confront future ecosystem disruptions both imminent and distant. 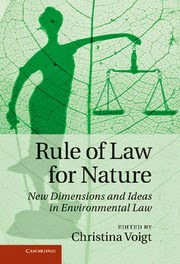 Robinson’s claim that cooperation, biophilia, and resilience have become built-in principles of environmentally sensible behavior seems based more in dogged optimism than in observed reality. After all, if these supposedly instinctive norms truly dominated human behavior (and the legal systems humans build to channel their behavior), the world would not be facing the “existential challenges” Robinson rehearses at the outset of Evolved Norms.

The unpleasant question, though, is whether humans’ “economic instincts” really are “maladapted” in a Darwinian sense. The genetic traits that made Homo sapiens capable of such profound ecosystem modification, after all, are the same traits that conferred on our species such astounding evolutionary fitness. These phenomena cannot be separated, from the harnessing of fire to the use of tools to the domestication of other species and on down through human history to today’s extraction of previously inaccessible fossil fuels. Yes, there are examples of human settlements or societies that have failed because of long-term consequences of behaviors that seemed adaptive in the short term. But globally, our species has been – to invoke one of Robinson’s preferred evolved norms – resilient enough to succeed in spite of the apparent havoc it has wrought on other parts of the ecosystem. “Economic instincts,” then, seem to be a manifestation of Darwinian “fitness.”

On this question Robinson would have done better to distinguish more sharply between genetic evolution and cultural evolution. Robinson quotes Aldo Leopold’s observation that human instincts foster ecological competition while human ethics foster cooperation, yet Leopold understood that ethics directly restrain fitness-maximizing behavior: “An ethic, ecologically, is a limitation on freedom of action in the struggle for existence,” he wrote.  Biological evolution has provided humans with the capacity to develop and apply such ethics: to conclude, for example, that it is possible to attain, as Robinson puts it, “sufficiency” in resource consumption. Cultural evolution, a product of genetics and environment, leads us, at least at some times and in some ways, to put that capacity into practice. This is remarkable in the biotic world. After all, the lynx preserves the hare population not because of ethical concern or self-interested foresight, but because when hares become scarce the lynx population crashes before the hares are all gone.