Kurt Newman at US Intellectual History Blog had an interesting post the other day on the place of legal history in the thought of Marxist historian EP Thompson. The post includes a long quote from Thompson's Whigs and Hunters (1975), arguing that law (here, specifically the early eighteenth century English law against commoners' traditional uses of the forests) functioned as more than just a mystifying tool of (upper-)class power. Some selections:


To be sure, I have tried to show, in the evolution of the Black Act, an expression of the ascendancy of a Whig oligarchy, which created new laws and bent old legal forms in order to legitimize its own property and status; this oligarchy employed the law, both instrumentally and ideologically, very much as a modern structural Marxist should expect it to do. But this is not the same thing as to say that the rulers had need of law, in order to oppress the ruled, while those who were ruled had need of none. 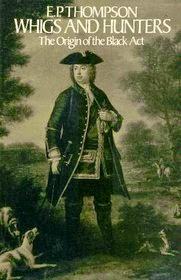 What was often at issue was not property, supported by law, against no-property; It was alternative definitions of property-rights: for the landowner, enclosure; for the cottager, common rights; for the forest officialdom, ‘preserved grounds’ for the deer; for the foresters, the right to take turfs. For as long as it remained possible, the ruled––if they could find a purse and a lawyer––would actually fight for their rights by means of law; occasionally the copyholders, resting upon the precedents of sixteenth-century law, could actually win a case.

When it ceased to be possible to continue the fight at law, men still felt a sense of legal wrong: the propertied had obtained their power by illegitimate means. Moreover, if we look closely into such an agrarian context, the distinction between law, on the one hand, conceived of as an element of ‘superstructure,’ and the actualities of productive forces and relations on the other hand, becomes more and more untenable.

For law was often a definition of actual agrarian practice, as it had been pursued ‘time out of mind.’ How can we distinguish between the activity of farming or of quarrying and the rights to this strip of land or to that quarry? The farmer or forester in his daily occupation was moving within visible or invisible structures of law…

...people are not as stupid as some structuralist philosophers suppose them to be. They will not be mystified by the first man who puts on a wig.

It is inherent in the especial character of law, as a body of rules and procedures, that it shall apply logical criteria with reference to standards of universality and equity…

Most men have a strong sense of justice, at least with regard to their own interests. If the law is evidently partial and unjust, then it will mask nothing, legitimize nothing, contribute nothing to any class’s hegemony. The essential precondition for the effectiveness of law, in its function as ideology, is that it shall display an independence from gross manipulation and shall seem to be just.

It cannot seem to be so without upholding its own logic and criteria of equity; indeed, on occasion, by actually being just. And furthermore it is not often the case that a ruling ideology can be dismissed as a mere hypocrisy; even rulers find a need to legitimize their power, to moralize their functions, to feel themselves to be useful and just.

In the case of an ancient historical formation like the law, a discipline which requires years of exacting study to master, there will always be some who actively believe in their own procedures and in the logic of justice.