Land tenure and the environment in Scotland seems to be a live topic in which sensitivity to environmental issues is informing legal and intellectual history and vice versa. April's Environmental History had a review by Peter Hansen of Fredrik Albritton Jonsson's Enlightenment's Frontier: The Scottish Highlands and the Origins of Environmentalism (Yale UP, 2013). Hansen writes: 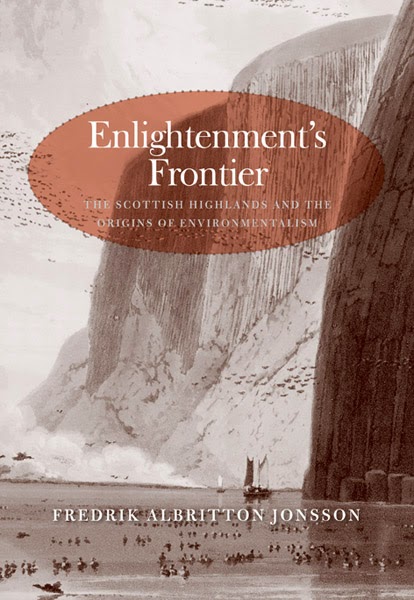 After the defeat of the Jacobite rebellion in 1745–46, land clearances in the Highlands uprooted residents in a region said to possess cornucopian abundance but excess population. The resulting long-term forced migration and agrarian transformation was shaped by ideologies of improvement that did not always mean replacing people with sheep. Surveyors, tourists, and naturalists visited the Highlands and made Linnaean surveys. The influence of a civil cameralism imported from Europe's northern fringe or landlocked provinces also shaped proposals for commercial-botanical projects to attain agricultural self-sufficiency. Voluntary associations such as the Highland Society or British Fisheries Society debated projects to create fishing villages or import crops that would acclimatize to Scotland's soil and climate. Such projects met with mixed success but often concentrated tenants in small-scale holdings. Thus the distinctive crofting form of land tenure in the Highlands was not an inevitable response to overpopulation but the consequence of specific intellectual debates over improvement during the Scottish Enlightenment.

At the heart of this book is the development of rival ecologies of commerce and improvement. Rather than the usual contrast between cosmopolitan liberalism and local economic nationalism, Jonsson explores the competing ecological assumptions of improvers, political economists, naturalists, landlords, and imperialists. John Walker, a conservative naturalist, adapted a providential natural theology to propose peat farms and the preservation of Highland culture. James Anderson, a Whig ecologist and radical polemicist, aimed to undermine feudal vestiges in the Highlands through internal colonization, new fishing villages, or flocks of cross-bred sheep. In contrast, Adam Smith assumed an ecological stability and a static relationship between markets and nature that left no room for the improver's local knowledge. Thomas Malthus was convinced that the Highlands were Britain's largest area of overpopulation, and such views were used to justify additional Highland clearances in the nineteenth century. Jonsson convincingly places these debates in a wider discourse of species extirpation articulated by naturalists who opposed Malthus's demographic determinism.