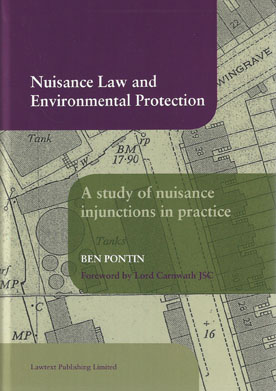 As explained in Part One, interpretations of English nuisance law’s contribution to environmental protection during the industrial revolution are changing. That is to say, increasing attention is being given to those instances where victims of industrial nuisance obtained remedies from the courts. Previously, emphasis had been placed on the doctrinal (notably in Joel Brenner’s account) and institutional limitations (in John McLaren’s) of victims of industrial nuisance obtaining a remedy. One of the turning points has been the close study of Adderley’s action against Birmingham Corporation in 1858 (the ‘Great Birmingham Sewage Case’), discussed in my book Nuisance Law and Environmental Protection.

In order to make sense of Adderley’s (and nuisance law’s) achievements – and why they do not fit within the traditional account of nuisance law failure – it is necessary to embrace a level of complexity in the social and economic backdrop of nineteenth century nuisance law that is lacking in the earliest leading studies of this subject. Thus, whereas Victorian Britain in Brenner’s account is characterised as dominated by urban and manufacturing interests in the face of which the courts daren’t say ‘no’ (McLaren is more nuanced), Adderley’s case suggests a power structure far more sympathetic to the plaintiff than hitherto contemplated by historians in this field. A power structure, that is, in which the landed aristocracy spun a persuasive enough (at the time) narrative of noble, honourable and authoritative resistance to the materialist excesses of industrialisation.

Among the first historians to appreciate the popularity – or at least influence - of this ‘back to the future’ narrative of upper-  and upper-middle class resistance to the commercial and later industrial revolutions was Asa Briggs, who noted (in The Age of Improvement (1959) 306) that the ‘Middle Ages…became the storehouse of lessons for reshaping Victorian economic life’. Martin Wiener made a similar point equally well (in English Culture and the Decline of the Industrial Spirit (1981) 6) when he commented that by the middle of the nineteenth century:


the idealization of material growth and technical innovation that had been emerging received a check, and was more and more pushed back by contrary ideals of stability, tranquility, closeness to the past, and ‘nonmaterialism’.

Adderley associated himself with this gothic revivalist tradition – his litigation was guided by the Coleridgean idea of the aristocracy as trustee of the nation’s natural treasures. Adderley was tenant for life of the estate, charged with looking after the estate both in homage to past family proprietors and for the sake of the child and later grant child to whom the estate would pass on his death.

This helps expand on the insights gained from Pierre Desrochers’ recent studies of the invention of pollution abatement technologies in nineteenth century England, which inventions are attributed to the enforcement of nuisance law (e.g. ‘Does the invisible hand have a green thumb? Incentives, linkages, and the creation of wealth out of industrial waste in Victorian England’ (2009) 175 The Geography Journal 3). Desrochers argues that clean technologies arose not so much from the pursuit of profit (incentivizing waste reduction) as from nuisance litigation.

Desrochers does not comment on the political complexion of nuisance disputes, although it is conceiveable that things could have been very different had Addereley not been typical of aristocratic victims of pollution who used nuisance law to remedy pollution. Indeed, on the counter-factual scenario of property at this time being widely held as a commodity readily exchangeable for money (rather than settled into dynastic, monopolistic family trusts), polluters would have enjoyed greater scope to enter into a Coaseian transaction in which the right to pollute was acquired at a considerable saving compared to investing in and operating cleaner production/service processes. Adderley did not wish to, and besides may have had difficulty from a trust law perspective, in selling the estate to the corporation as an alternative to them purifying the sewage discharge.

What is interesting is that the courts appeared to have been quite conscious of – and supportive of - nuisance law’s practice of pushing the frontiers of clean industrial technology and thus to enabling Victorians not to have to make an invidious choice between the material fruits of industry and the aesthetic/spiritual/social fruits of nature. A good illustration of this faith in industry’s capacity to flourish whilst complying with the common law is Lord Campbell’s riposte to a manufacturer who in Imperial Gas Light and Coke Company v Broadbent (1859) HL Cas 600) claimed that there was no way of doing business (gas manufacturing) cleanly – the Lord Chancellor saw no reason why they should not invent one (at 611). Many clean technologies were invented in these circumstances, one of the earliest examples being William Gossage’s ‘Tower’ (patented in the 1830s). That constituted a novel flue gas treatment technique that helped many dozens of large alkali works which adopted it comply with nuisance law.

The emergence of techniques for the purification of sewage and acid gases required not only the ‘stick’ of an injunction but the carrot of a stay of execution – a  suspension of the injunction, to allow the defendant time to work out the most convenient mode of compliance. The rationale is explained by Page Wood VC in the Birmingham case (at 541):

‘Before granting an injunction compelling the sudden stoppage of works like these, inasmuch as such an injunction might produce considerable injury, the Court, by way of an indulgence, would afford the Defendants every conceiveable facility to enable them to remedy the evil complained of.’

Neither Brenner nor McLaren mention this role for the suspended injunction, which we now know was critical to the nineteenth century reconciliation of industrialist and landed neighbours.