Holly Doremus at Legal Planet reminds us that last week was the 150th anniversary of the signing of the Yosemite Grant Act. 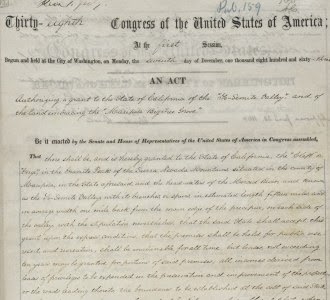 Doremus writes that the law was


one of the first tangible expressions of the national park impulse. The Act granted Yosemite Valley and the Mariposa Grove of giant sequoias to the state of California on the condition that they be held forever “for public use, resort, and recreation.” The idea behind the grant, of course, was that some parts of the public domain should not be turned over to private profit or monopoly, but rather should be available to all and preserved for the public benefit. In 1905 California receded Yosemite Valley to the United States, and it became the heart of a much larger national park which today is one of the icons of the national park system.

Of course the parks are not without their problems, and Yosemite has been emblematic of those as well over the years. One reason California ceded the valley back to the U.S. was that management turned out to be more costly and controversial than the state had anticipated. And public use has turned out to be difficult to reconcile with protection of the valley’s distinctive resources. Complaints about over-development in Yosemite Valley are as old as the grant. Park managers today struggle to deal with traffic congestion, on the roads and even on the back-country trails, and other consequences of the park’s popularity.

Still, the vast majority of Americans would surely agree that Yosemite and our other national parks have been well worth the cost and the political and philosophical struggles.

The National Park Service has a website (from which the images here are taken) with information on the park's history and events surrounding the anniversary.
Posted by David Schorr at 9:31 PM